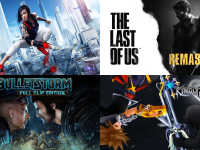 The video games industry is rife with shady business practices. Having people shell out sixty dollars for a game than thirty for a season pass or even more if there is a special edition of a game. This renders most reviews or opinions of a game worthless to the developer. They already have your money and that’s what they mainly care about; rightly so as this is a business.

A favorite of the video games industry is the reboot, remaster, and remake syndrome. If you recall it wasn’t long ago that games like The Last Of Us was getting a remaster just a year after its initial launch. Not to mention Mirror's Edge Catalyst that was pretty much a remake of the first game. Worse yet was that nothing was improved from either of these video games except the graphics and minor tweaks that patches could have covered. In the case of Mirror’s Edge you could argue the reboot/remake was worse.

This leads me to the most recent offender of this; the Bulletstorm: Full Clip Edition. After getting a few hours with the game, it plays just like I remember it playing with the graphics having noticeable upgrade. I like the game; it’s fine. My problem is that it was a full priced title with a five dollar day one DLC. If you have a PC or an Xbox One you can still play the original, so if you have a copy already you aren’t getting anything I’d consider worth another sixty dollars.

Don’t think I am totally against remaking an older game. Skyrim was remastered due to a large demand from the fan-base wanting to a single player experience on their next-gen consoles. Most PC gamers are lucky as they get most of the remasters for free. Not always the case though like when the Metro video games got their remaster. PC owners of the game did get a heavy discount on what is essentially a texture pack upgrade but not the console fans. Some people still haven’t switched from the original Skyrim to the remastered version because they claim their mods make the game looked ten times better. To each their own. I do enjoy when the odd game lost to time does get remade, I just don’t think I would have gone back and played the first Halo if it wasn’t for the anniversary edition.

To sum everything up, please stop polishing up old games and selling them for sixty bucks and try to wait for more than few years to remaster a game. If the PS4 had backward compatibility a large amount of these video games would be pointless. Kingdom Hearts recently received a re-released for the dozenth time on the PS4. I don’t see who is still throwing money down that bottomless pit. At least you don’t have to search for old Sony video games since every generation they remaster pretty much their whole library to charge you twenty bucks or more for a game you have bought two or three times already.