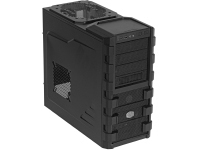 We like to help everyone when it comes to gaming. It is time for a new gaming PC build from us showcasing Ryzen 5 1600X 6-Core

I haven’t really written a gaming PC build in a while due to the stagnation in the marketplace. All that has changed with the release of AMD’s Ryzen CPU's. Vega will be released in the coming months as a refresher to their 400 series of graphics cards. I am more of an NVidia guy than a team red player, but AMD has done some terrific things with making 1080p, and VR gaming accessible at lower price points than ever. You can get a 460 for around $100 or less and play games like DOTA 2 pushing 60 fps. I hope to revive this series for a short while giving anyone who wants to build a gaming PC a start at any price point.

I know this isn’t a budget friendly gaming build. I did find a few good deals if you need a case. I am also not too sure about the CPU cooler. On Newegg, I saw the CPU doesn’t come with a cooler and I don’t know for sure which coolers will or won’t work. I’ve read many forum posts saying that you can buy a bracket from the coolers manufacturer but I’ll leave this up to you as everyone's case may be different. If you already have most the components you could do what I did personally and just get the CPU, RAM, and motherboard. My selection ended up being just over $500 for this gaming PC build.

I based most of the components around things I thought would fit well in an AMD build. The Asus Prime has all the bells and whistles you would need in a modern motherboard. While no board is perfect, you can always substitute my suggestion for one more suited to your needs or has a feature you prioritize; same with the GPU. Most people can’t afford and simply don’t need something like a GTX 1080 for gaming and the RX 480 has more than enough for anyone looking to game at 1080p at 60fps. Like most cards, this one comes in a variety of flavors I chose the Gigabyte for its sleek twin cooler design and price.

Always check to make sure all your components are compatible and be sure to check the wattages of listed for each part. Most people won’t need more than 500 watts, but again everyone’s case is different. If you enjoyed this gaming PC build let us know. If you have a suggestion, like a PC at a certain price point, feel free to comment and discuss down below.

DakotaDidYou [ Wednesday, 19th of April 2017 - 01:20 PM ]
You make a lot of good points my friend. My main reason for going with the 1600X was to test the extended frequency range technology, to see how much I can push that particular chips overclock. For my personal rig. I build PC's for people and you'd be surprised how many people have no clue about overclocking.

Anon Commenter [ Wednesday, 19th of April 2017 - 05:12 AM ]
Not a bad build but you should go with r5 1600 since you can overclock it easy and the cpu cooler is include. With thé money you save buy higher speed ddr4 since it affect ryzen a lot (try to buy ddr4 3200 if you can). Otherwise i have nothing to say
Go ahead and login or register