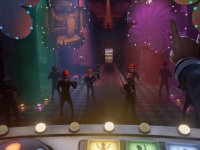 Great news for all of those gamers out there still enjoying We Happy Few. It looks like there is now even more to enjoy as a new major update for the game has been pushed out there that adds a whole new area to explore and quest on. Not only that, but some other great things have been added into the mix so that you can now stop pestering Compulsion Games for a bit so they can double down on making We Happy Few a final project and not an early access thing that we have right now. When you force the developers to look at things that could be left alone for now it only pushes the final launch out just that much further. Then again, I guess that is why they went early access so they could get all of that out of the way.

What we do have now is the Maidenholm update for We Happy Few and, as I said, it brings a new island into the world to explore in the way of Maidenholm. It will be filled with all sorts of extra quests and things to see as well as things to survive. No longer will we be restricted to the main location we've seen and played quite a bit already. That and it also paves the way for a new enemy type in the way of the Peeper. Just another way to get caught out there with the wrong levels of Joy in your system and thus cause a panic. I have a feeling that this is only the beginning of enemies like this as the development presses on.

We Happy Few — The Maidenholm Update

Maidenholm is the second major content update to come to We Happy Few and adds a brand new island and several frequently requested features such as the ability to choose between different types of playstyles. Players can now select from the Birdwatcher, Downer, or Vigilante playstyles to adjust the game’s overall difficulty and even remove the survival mechanics entirely in the case of Birdwatcher. Additional improvements include multiple save slots, new encounters, procedural music implementation, and support for distinct regions within the Garden District.

This update also adds in a new way to experience We Happy Few in the way of difficulty modes. Apparently some gamers didn't like the survival aspect of the game or they didn't think it was hard enough so Compulsion Games added in the options for us. Now you can forego all of the survival needs of eating and drinking in Birdwatcher mode or you can have the difficulty cranked up to eleven with Vigilante mode. Main that will make the enemies tougher and survival a real pain in the ass. If you thought We Happy Few was fine the way it was though, there is still the option to play it that way so everyone can be made happy as the development carries on. Just be glad for what we have so far you jerks.

There are also a slew of other additions coming in this new update for We Happy Few but these seem to be the larger ones. I'm sure there will be plenty more as it is still only in early access on the PC and Xbox One. Although hopefully all the feedback and requests are helping them to get to a point where we no longer are seeing the basic assets and can soon see the production ones, but they need us to be happy with We Happy Few before that can happen. So take that trade-off as we sit and wait. It is partially our fault that we are still waiting on the final build of the game.

Are you still enjoying We Happy Few or will this update be dragging you back into the mix? Are you glad to see the new options for gameplay or were you content with how they were before? Do you foresee many more enemies like the Peepers coming up in future updates or will they all be on a "as needed" basis to help keep development flowing? Let us know your thoughts on all of this down in the comments and discuss. For more on We Happy Few and all of its updates, be sure to stay right here on the site. We'll try and keep you happily filled with all of those updates as we can get them.