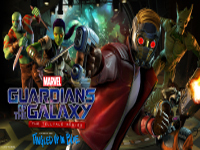 The date has been set and the Guardians Of The Galaxy episodic title will be here by April 18th for those who want to pick it up digitally for the PS4, Xbox One, and PC. It kind of looks like Telltale Games is only slightly using the new film to synergize sales for the game but none the less it is coming. I guess you could say it is going to piggy back off the Guardians Of The Galaxy sequel in the way that a physical form of the game will be available on May 5th, the same day as the film, but that won't get everyone as amped up as it'll still only be the digital code for the season in the box more or less. To each gamer though…

Now that the pilot episode for Guardians Of The Galaxy has been set, that also means that a trailer for it all is also here. This is how the developers roll so we should be used to it. What is a bit interesting here is that it doesn't give us a solid fix on what possibly could be the open and overarching story for the game. We know that Thanos is supposed to be the "big bad" here but given that Guardians Of The Galaxy is an episodic choose-your-own-adventure style game, I have a feeling we will be our own enemy as each of the team is vying for the object Thanos desires as well. I guess we'll know more in the coming weeks though.

Guardians Of The Galaxy — Tangled Up In Blue

Marvel's Guardians Of The Galaxy: The Telltale Series is a brand new story of the universe's unlikeliest heroes: Star-Lord, Gamora, Drax, Rocket, and Groot. In the wake of an epic battle, the Guardians discover an artifact of unspeakable power. Each of them has a reason to desire this relic, as does a ruthless enemy who is the last of her kind, and who will stop at nothing to tear it from their hands.

From Earth to the Milano to Knowhere and beyond, and set to the beat of awesome music, you wear the rocket-powered boots of Star-Lord in an original Guardians adventure, where your decisions and actions drive the story you experience.

The series will feature a star-studded cast of voice talent, including Scott Porter (Friday Night Lights, The Walking Dead: The Telltale Series) as Star-Lord, Emily O'Brien (The Young and the Restless, Middle Earth: Shadow of Mordor) as Gamora, Nolan North (the Uncharted series, Pretty Little Liars) as Rocket, Brandon Paul Eells (Watch Dogs) as Drax, and Adam Harrington (The Wolf Among Us, League Of Legends) as Groot.

I do have to say that I am a bit let down by Telltale Games here for Guardians Of The Galaxy as it sounds like it is going to go down the path that all of their titles, sans one, have gone in terms of releases. So far it's only been their Batman title that gave us a new episode each month since it first kicked off. As it sounds here, it will be months between new Guardians Of The Galaxy episodes which could leave a lot of downtime to remember the events between them all. Of course, if it is on par with Tales From The Borderlands in terms of entertainment, then it will be easy to keep all of that in your head and not need to rely on the "previously on Guardians Of The Galaxy" that will be coming for sure.

Are you ready for Guardians Of The Galaxy to finally come or do you wish they would have held off longer to make is so we could get new episodes quicker? Do you think that Thanos will stay the main villain of the story from start to end or will he only be in there to kick the events off? How long do you think that we will have to wait for each new episode this time around and why haven't used what worked for Batman? Let us know what you are thinking in the comments. As Guardians Of The Galaxy kicks off and moves forward, we'll have all the updates for you here on the site. Keep checking in so you can be certain to be up to date on it all.