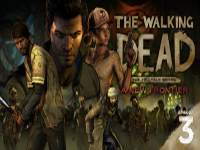 Last week we had a nice little tease for the third episode of The Walking Dead: A New Frontier. It showed off a nice little bit of what we could expect in this episode but also looked like it was very focused on the pre-end history of Javier's and little more than that. This week it looks like Telltale Games has given us all the launch trailer for the episode, it still launches on March 28th though, and it definitely goes down a path a bit of a different path than previously thought; all of which in a good way. I had little doubt that this version of The Walking Dead would leave us hanging in a weird spot.

As you can see below, The Walking Dead: A New Frontier's Above The Law episode will delve into a bit more of the two brother's relationships and hardships, but also it will show both the past and semi-past events and how others will handle them. I say semi-past in reference to events that have or have not taken place based on our choices in the last two episodes. As I've said before, I've only been down a specific path so far and am not sure how all the choices could alter the story so far. Although with limited capabilities to predict all that, I'm going to guess we are all in a similar boat enough so they don't get forced into a specific spot.

Have a look at the new trailer for The Walking Dead: A New Frontier and then get ready to jump on into it next week. At least if you playing it episode to episode. Something that can be fun, but also make one forget where they are in the story.

The Walking Dead: A New Frontier — Above The Law

Beginning Tuesday March 28th, players can download Episode 3: 'Above The Law' on PlayStation 4, Xbox One, PC/Steam, iOS, and Android-based devices. The episode will also download for all users of the special Season Pass disc for consoles, which includes the critically acclaimed two-part premiere episodes, and grants access to Episode 3 and all subsequent episodes in the five episode season for download as they become available.

After the shocking events of 'Ties That Bind: Part Two', Javier struggles to find a role in his newly reunited family. Meanwhile, tension within the walls of Richmond grow. Will Clementine and the rest of the group turn against Javier? It may be time to choose between the family you're born into and the family you've made…

What are your early thoughts on this new episode for The Walking Dead: A New Frontier? Do you think that we will see an even split from current time character events and past ones or will it just be a big flashback scene and the rest "in the now?" Do you think that we will get to see A.J. again in the game or was he written off for a reason? Let us know all those thoughts and more down in the comments. As more for this season of The Walking Dead is revealed, we will have it here for you. Keep checking on in here to make sure you get to see it all.