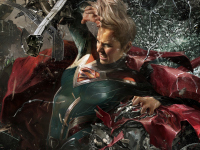 Here we go with our third installment of the Shattered Alliances trailers for Injustice 2 and this one is all about Super Girl and her role in the epic fight(s) that are to come. It even looks like we are going to be getting a few call backs to the House Of El's past here from NetherRealm Studios based on this trailer which I hope will point to the bigger bad guy that has yet to have much focus; Brainiac. He's in Injustice 2 and affects the whole story somehow, but as it seems right now it has all been about the heroes of the DC universe dealing with the aftermath of the first Injustice story. I going to guess that we will be seeing a part four here soon with that focus.

Thankfully, unlike other trailers, the character announcement for Injustice 2 today is on the forefront here in the trailer as it looks like Black Adam has now been confirmed and shown a bit in action here. While it is all in-game footage given the engine and how they have done it so far, there isn't much in the way of showing off how he fights or any of his actual gameplay bits. I'm going to guess it will be at a later time like all of the others that have been shown off but never given a solid gameplay showing. Or *gasp* maybe it will be kept hidden until May 16th so we can all try it and see it for the first time at launch. I have a feeling some of the characters will have to be done this way.

Another interesting note, at the time of this posting, the Injustice 2 website still states that we will be getting another character reveal today. Black Adam is currently showing on the roster there but the slot next to him now has the date that was previously covering up his face. This could just be a minor mistake on NetherRealm Studios' side and truly mean nothing, but it could also be that we may get a surprise character later in the day. I'm going to guess the prior, but it would be nice to see the Injustice 2 roster fill up with yet another character for us to pine over. I guess we'll see.

After the fall of the Regime, Black Adam returned to his home defeated and humiliated. Staying hidden from Batman’s watchful eye, Khandaq has become a safe haven for the Regime’s remnants. There they await the day that together they can restore the Regime's rule upon the world.

If that wasn't enough Injustice 2 for the day, and you want to see a couple of characters get a breakdown, then you are in luck here. The guys over at NetherRealm brought us a look at Dr. Fate and Robin yesterday so we can get a better understanding on how the characters will play. Dr. Fate is more of a defensive character and Robin is more of a "trickster" looking characters. You can see all of that in action just below as well as a look at some of the gear and changes it will bring these characters if you so want. Have a look and enjoy.

Do you think that Super Girl is going to play a huge role and maybe bring a third faction of sorts to Injustice 2 or is this just part of her story we have today? What are your thoughts on Black Adam as it stands here and do you think that we may see one more character today? How do you feel about Robin and Dr. Fate now that they have been broken down by NetherRealm Studios here? Let us know all of those thoughts and more down in the comments. As we get more for Injustice 2, we will bring it to you. Be sure to keep checking in to see if another character is shown off for the game or just any updates to it all in general. We'll have it all here for you.