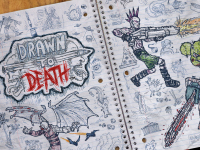 Back in February we had word that Drawn To Death finally had a set release date of April 4th but also that it was going to run the cost of $20 USD when it was first brought up as free-to-play. This brought on a lot of concern and questions for Bartlet Jones as to what had changed and if it would eventually become one of the titles that PS Plus brought us for free on our PS4. As it turns out, Drawn To Death will be coming to the PS Plus service for free and that "eventually" timeline asked is the same as its launch date. That's right, Drawn To Death will be free for all subscribers on April 4th now. As if it wasn't good enough already.

To further the excitement here for Drawn To Death, we also received a few updates and explanations on some of the new features added into the final game that most have not seen in the Early Access that was held. Two of them mentioned before was the Sphinx Riddles and a Volcano God of sorts. As it looks, the Sphinx Missions or Riddles are specific missions to, presumable, be played out during matches that can unlock new weapons and levels for completion. There are only eight of them as described so I'm going to guess that there are a bit on the trickier side of things, but it is a great way to expand the armory and level selection options.

As for the Volcano God thing, it looks like this is all tied to some character-centric missions we'll have in Drawn To Death. Again, not too fine of details revealed just yet but each of the six launch characters will have 15 missions of their own that when completed will unlock costumes and taunts for the characters. Completion of all 90 missions will grant you access to the "Volcano God" for whatever that may entail. It could be some kind of hidden "boss fight" in Drawn To Death or it could be an unlocking of some truly epic new bits of gear. I'm going to guess on a specific character skin and trophy as Bartlet Jones has taken great care to make the game not pay-to-win and done a great job so far. Sphinx Missions: Wake the mysterious Sphinx and see if you can solve her eight battle-focused riddles. For every riddle solved, a new weapon — or a new level — will be rewarded!

Character-centric Missions: Besides leveling up characters, players will also have the opportunity to work through 15 action-packed missions per each of the six launch characters. Earn costumes and rare Taunts as you work your way through your favorite characters. Master all of the character missions and you may come face to face with the Volcano God!

Mystery Boxes: Who doesn’t love Mystery Boxes?! The Drawn To Death Mystery Boxes are filled to the brim with amazing character taunts and insanely creative character skins. Get a free Mystery Box just by playing three matches online and then earn Mystery Boxes for every 150 kills you execute on the battlefield!

Climb the Tower: The Drawn To Death launch tower is based on the theme Dark Fairy Tales, and if you play in ranked mode, you’ll have a chance to reach the tower’s top, earning insane stickers for every floor you reach!

Insane Mystery Special Offer: I’m not at liberty to go into detail or spoil the surprise but let me just say this: “Destroy my enemies and my life… is yours!”

As for the other extra bits for Drawn To Death, it does sound like the Ranked Tower will be looking and feeling like it did before but also that there may be other "themes" as time presses on. We'll also see some of these mystery boxes in the game which looks to be yet another way to unlock some cool little extras for Drawn To Death, but the bigger thing is something that looks only to be hinted at for now. It is still only listed as an Insane Mystery Special Offer but it fans of the Game Director's work can possibly work it all out by now.

If not, the quote above is from God Of War. Specifically it is the deal Kratos screams to Ares on his metaphoric death bed. Could this mean we'll see Kratos fully formed in Drawn To Death or will it just be some awesome skins themed around the character and titles? Hells, it could also just mean that we could be getting the option to have the announcer be played by T.C. Carson. The mystery will hopefully be solved here in the next few weeks as April 4th is not too far away. Unless this is an extra secret for getting a Platinum trophy for Drawn To Death just as we did in God Of War III. Doubt it would go that far, but we'll see.

How excited are you now to see that Drawn To Death will be free if you have PS Plus currently? Do you think that these character-centric missions and sphinx missions will be played out in matches or more in the "tutorial mode" setting we've already seen? Do you think that we will see a full Kratos and then maybe a full Dollface in the mix or will it be weapons, levels, and other items that will bring them into the mix? Give us all your thoughts on this and more down in the comments. We here are super-excited for Drawn To Death and will keep bringing you every little bit we can. Stay locked into the site so you can keep as up to date as all of us.