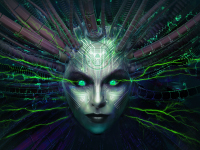 Maybe you remember back in December of 2015 when we finally had word that System Shock 3 was officially in the works or maybe you don't. It has been quite some time since we've hear anything new out of Otherside Entertainment on it and I know it fell on the back-burner for me as well. As it turns out it looks like System Shock 3 is still happening and that Starbreeze will be helping bring the game to market for the PC and "other platforms." I'll read that as the other major consoles at the time like the PS4 and Xbox One. Unless it takes too long to make and we move onto the next consoles in the line-up. Hopefully that won't be the case.

None the less, Starbreeze will be throwing $12 million USD at System Shock 3 to get made, marketed, and brought to our homes. Currently the game is still in an early concept stage of development. That read to me that we are most likely still a year off from seeing something in terms of true gameplay for System Shock 3 and hopefully only a few months, like E3, away from seeing some kind of concept art for the game. Maybe that is a little too much to hope for at this point but I know we all want to see this game get made even though the remaster is still on its way. That is the remaster of System Shock to be clear.

Starbreeze, an independent creator, publisher and distributor of high quality entertainment products, has signed a publishing agreement with Otherside Entertainment regarding the game System Shock 3. Starbreeze will invest $12 million to bring the game to PC and other platforms.

System Shock 3 – The latest in the series of landmark, award-winning games from Otherside Entertainment is in development under the direction of industry legend Warren Spector and a dream team behind such ground breaking games including the original System Shock & System Shock 2, as well as Thief: The Dark Project and Deus Ex.

“System Shock is one of those iconic franchises in the history of games that still gets my blood going and Mr. Spector is one of the founding fathers of the modern action RPG” said Bo Andersson-Klint, Starbreeze CEO. “We’re greatly looking forward to bringing System Shock 3 to players world wide in our collaboration with Otherside Entertainment and Warren Spector’s team. I’ll be first in line to play”.

“We are thrilled to be partnering with Starbreeze for System Shock 3,” said OtherSide’s CEO Paul Neurath. They truly get games and gamers, and have been able to translate that understanding into a robust publishing business, and build thriving gaming communities around their franchises.”

What do you think about all of this for System Shock 3 and do you think this will speed up the production? Do you think we could see something this year in terms of anything for the game or will we be waiting for a while longer? What do you want to see out of this game when all is said and done? Let us know your thoughts on all of this down in the comments and then discuss. As more for System Shock 3 is revealed and discussed, we will have it here on the site for you. Keep your eyes out for all of that and keep checking in for all of the other great news and updates we have to bring you.