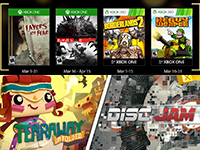 A new month is almost on us here with March and that means new video games that we are going to get for free. Well video games that you will get for free if you are part of the PlayStation Plus or Xbox Gold services. If you are then you may be in for a treat as the list of titles going live starting next month is here and we have it for you. Again we get to expand out titles on the Xbox One and PS4 without needing to make any extra spends at our local stores.

Another solid month of free video games here if I do say so myself. Although if I had to give one the edge over the other then all the Xbox gamers out there are in for some great treats as Layers Of Fear is totally worth playing through and the money, but here you get to experience it all for free. That and Borderlands 2; solid. Although I have been hearing some great things about Disc Jam and Tearaway Unfolded so it looks like my time between all of these free video games is going to be split rather hard. Not to mention that they all come out when so many other titles are getting their initial launch. First world problems and all that jazz for March now.

Here is the list of games we will all get for our PlayStation systems starting on March 7th of 2017.

Here is the list of games we will all get for our Xbox systems starting on March 1st of 2017.