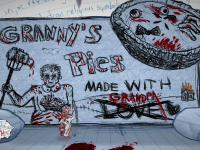 Unless you are blind and living under a rock, you should know that Drawn To Death has a very unique style in terms of the art direction. It's not the first of its kind but it definitely shows off the direction that Bartlet Jones wanted to go with in the game and it has captured the eyes of many and the disdain of others. Drawn To Death is definitely not going to be for everyone but at least it is something new and with some solid gameplay to back it all up and I look forward to April 4th when it finally is released in its final form on the PS4.

All of that said, some people have been curious since day one as to the art style that was selected for Drawn To Death and just how it came to be. That and some of the fun stuff that has been mixed in that some astute players may have spotted already or what remains to be seen. That is why we get developer diaries and videos like them and that is what we have here today. This one also digs into the art style and looks that we will get to know well here for Drawn To Death as well as even more fun little things hidden throughout the game. At least if you have time to sit back and enjoy them amidst all of the fun murder going on inside the arenas.

It has been very clear that Drawn To Death is not a story based title unlike many of the past titles that the Game Director has worked on, but it has been stated that there are things mixed into the world that if you pay attention to, we can get a bit of something. That is where the craftiness of these artists come in and some of that is talked about here and still hidden within the game. If you played the Early Access for Drawn To Death you should have seen some but also had a taste of it all mixed with the art and the trophies that you could have unlocked. Pictures and gameplay can say a thousand words and this proves it a bit more.

Drawn To Death — Behind The Notebook

Game Director David Jaffe sits down with two artists of the game, talking about Drawn To Death, the brawler/shooter hybrid that takes place in the notebook of a teenage kid. These artists do a deep dive into the tone, what makes Drawn To Death so unique, and the challenges involved with drawing sketches similar to that of an angtsy teenager. What’s waiting for you inside the pages of the notebook? Jump in and find out!

What happens to be your favorite bit of art in Drawn To Death that you've seen so far? Did you catch any new tidbits and hidden gems in the video here or was it all the same to you? Do you think you will be able to get a story for the game based on the visuals and bits of text around the arenas or will they just be some amazing things to look at while you are hunting down your next kill? Let us know down in the comments and then feel free to discuss. More for Drawn To Death has to be just around the corner and when it is revealed, we will have it here for you. Be sure to keep checking in so you can get every tasty bit before April 4th.