Things Are Getting Creepier In Little Nightmares With New Gameplay
by David 'Hades' Becker [ Wednesday, 8th of February 2017 - 10:00 PM ] 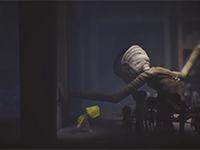 Before now we all had a solid idea that Little Nightmares was going to be filled with a lot of creepy and dark imagery. At least if you've been following along with everything that Tarsier Studios has put out for the game so far and have not been trying to stay as free of gameplay spoilers so far. In the end it looks like a title that is right up my alley there and with some new gameplay from Bandai Namco today, Little Nightmares gets even further locked in for me and hopefully all of you who are into some dark and creepy platforming. Time to take notice as it is still launching on April 28th for the PS4, Xbox One, and PC here soon.

While I would recommend going back and checking out a lot of the other gameplay out there for Little Nightmares, I do have to say that with the new gameplay we have here I am totally digging the new creature we will have to deal with as we help Six navigate the horrors of the word. Not only that but there are even some extra little things like the hanging man in the "background" of the levels that is pretty subtle at first but definitely helps tell the story of the specific room or area we are in. It looks like this will be one of the big ways that Little Nightmares does this and I love it. More titles should do this to further the storytelling methods games can have.

No more gilding the lily here though. Have a look at the new seven minutes of gameplay for Little Nightmares and see if it falls into your likes. For the most part it isn't too spoilery if you don't want things to be destroyed for you before April. At least in terms of solving the puzzles that are shown here. Tarsier Studios has done well to keep all of that to a minimum here again.

Six sneaks around an unsettling environment.

What do you think about Little Nightmares as it stands here? Do you like the new enemy in the game or will it just be another boring obstacle for you? What other style of enemy do you think we will see in the final game or will they all be dumb creatures we'll have to distract with sound just to press on? Let us know what you are thinking down in the comments and then discuss. For more on Little Nightmares as it comes, be sure to keep checking in here. We will keep all the new video and updates flowing out for you and you'll want to be sure you are completely in the know.