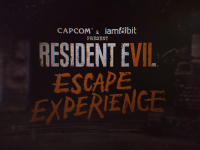 While we hoped about it earlier in the week and the first time we were able to see Resident Evil get an escape room type of experience, it looks like those hopes and dreams are being fulfilled here as it has just been announced that there will now be a national tour. At least a North American national tour for it all as Capcom has not mentioned about taking it on the road outside of the States. None the less, it looks like there will be six more opportunities for gamers to try and get that real Resident Evil feel in a real escape room. At least as real as they are legally allowed to make it and still keep your safety in mind. Who needs to be safe right?

To be clear though, this doesn't sound like the Resident Evil 7 experience that there was in London but more of an update to the one that took place in Los Angeles, CA last year. Mainly with all of the new things mixed in from Resident Evil 7 that they can get with all of the old puzzles and nods to the Spencer Mansion and other locations in the game's universe to entice fans. Hopefully not all of the old puzzles though as it does seem like it would be a waste to just force gamers through the exact same thing once again. Then again we are talking the world of video games so…

Tickets to join the experience are currently up for sale; at least at the time of this original posting. It looks like they are ranging from $35 USD to $40 USD depending on where you plan on taking the Resident Evil experience in. There is no word on how long the whole thing should last but for a true fan that shouldn't matter. It should all be about testing your skills to survive a safer version of a Resident Evil game after putting down RE7 for just a short time.

The Resident Evil Escape Experience will be available at six major cities over the next few months, running in two cities at a time for a few weeks each:

Are you excited to see that you could have a chance to experience Resident Evil in real life again? Are any of these six locations near enough to you so you can make the journey out or are you still stuck at missing out like the last one? How different do you think that this will be compared to what it was last year? Let us know down in the comments and then feel free to discuss as you wish. For more on Resident Evil in all of its forms, I am sure there will be a lot more, be sure to stick here on the site. We will keep covering it all and bringing it to you and you won't want to miss a thing.