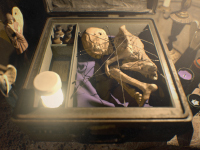 Well, today is the day and Resident Evil 7 has launched out there in the world which would normally just mean that all we would get is a nice little update and a launch trailer to look at for those who were still holding out for the game. It's the usual way it goes but it looks like Capcom is mixing things up here as it looks like not only did they give us a rather telling launch trailer to gaze upon, but they also detailed out the first two major DLC packs that will be coming to Resident Evil 7 and one of them will be here in only a few short days. Yes, you read that. Days and not weeks or months as the first pack will land on January 31st for those with and without the Season Pass for the game.

First things first though, we have the launch trailer here for Resident Evil 7 and it is truly amazing to look at. I am a bit surprised to see that there was a lot shown off here than we have yet to see promoted thus far and it even verges on the side of spoilers for those who have a keen eye. Take that as you will and watch it if you wish. No one will be upset if you skip it until you've been able to play the game directly.

Now let us move onto the big thing here and that is the DLC packs for Resident Evil 7. As mentioned, one of them will be coming in a few days here and it looks like it will include a few new ways to survive in the game, or at least challenges to do so and new gameplay modes. All of which sound rather horrifying in general except for the pack that will be landing on February 14th. At last there sounds to be an attempt at levity in Resident Evil 7 as we will have to force feed Jack for his birthday. Seeing as Capcom listed it as humorous I'm hoping it will be cake and ice cream but I would not be shocked if it is flesh and eyes given what is known for the game already.

If you didn't pick up the season pass for Resident Evil 7 or get an edition of the game that comes with it, you still have the option to pick up each on their own if that is your jam. It also seems like there are no further details on the addition story DLC portions at this time but it has been said that they should be out sometime this Spring. Well at least in terms of the Free Not A Hero story DLC and not the one that is included in the Season Pass for the game. I have a feeling they will sync up though to keep all of us happy and gaming though.

Purchase the Resident Evil 7 Season Pass and get access to the following additional content as it is made available. All Season Pass content will be available by December 31, 2017.

Lastly, and as promised, it looks like we are starting to get our views of what went on inside the Resident Evil 7 live experience that was teased yesterday and last week. I am sure we will see more, but below is a rather well edited version of the experience for all of us who had to miss out to, well, experience. It does look like Capcom nailed the feeling of both the game and a true haunted house experience there unless this was extremely edited to add in a lot of extra things. I doubt that and also truly am sad that we didn't get a chance to see it all live. Here's hoping for a world tour of sorts as we get closer to the months of horror.

Are you a bit surprised to see that Resident Evil 7 is getting a good portion of its DLC so close to launch here? Do you think that both of these packs will be a true sign of what is to come or is this just the team getting even more horror out to us with the quickness? When do you think we will see that story DLC finally land and what do you think it will house? Let us know down in the comments and then feel free to discuss. As more for Resident Evil 7 is revealed and explained, including our review, we will have it up here on the site for you. Be sure to keep checking back in so you can stay completely in the know and further celebrate the game's launch.