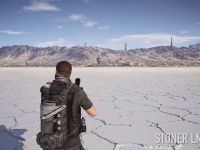 Hopefully by now you have seen just how beautiful Ghost Recon Wildlands could potentially look when you spin it up on March 7th. So far it has looked amazing and sounds amazing but given how we've been burned in the past by other Ubisoft titles and the sizzle of promotional materials, it could leave one thinking that we are getting the razzle dazzle yet again. That's why I generally like to stay cautiously optimistic to pessimistic at all times so I won't be let down just in case games like Ghost Recon Wildlands don't live up to all of the hype and visuals that we are given during development.

Now that the pessimism is a bit out of the way there, let's dive right into a new showcase video for Ghost Recon Wildlands that shows us just how lush the game's world can be and also the weapons we will be using to cover it all in a layer of blood. That and also here how the team over there is trying to bring the weapons and firearms to life for us with the audio in the game and not so much in the visual side of it all. I'm not saying they don't look great mind you, I'm just going with the focus on the audio here more than anything else. I am sure that gun nuts can already attest to how they look and seem to function in the game from all of the past videos and showcases we've seen thus far.

Here, have a look for yourself. It may not be much for Ghost Recon Wildlands but it is something new to look at and pine over as we wait for another huge reveal like we had last week with the single player mode. Unless Ubisoft is going to go back to focusing on smaller items like this as we push forward to March here.

What are your thoughts on how Ghost Recon Wildlands is looking here in the new video? Do you think this is all razzle dazzle for excitement or will this be about what we can expect to see in the final version of the game? Can you here the difference in the firearms here or does it all pretty much sound the same to an untrained ear? Let us know and then discuss it all down in the comments. As more for Ghost Recon Wildlands is released into the wild though, be sure to stick here on the site. We'll have it up here for you to view and hopefully enjoy so you can keep your longing for the game under control until launch.