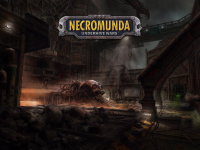 Another Warhammer title is in the works with Necromunda: Underhive Wars and it aims to tackle the Necromunda game in a tactical RPG setting

Maybe you were sitting around and thinking that we needed another Warhammer 40,000 game out there after the success of Mordheim and that it also need to be set in the Necromunda setting of the classic game. It isn't just you as it looks like Rogue Factor was doing that too and so was Focus Home Interactive as they are working together to bring us yet another title in the universe just as described. Yes, now we have Necromunda: Underhive Wars here to be announced for the PC, PS4, and Xbox One on its way due to all that success and also to bring another version of the universe off of the table and into a digital world setting. Happy days…

Of course this also means that as we have just this announcement of Necromunda: Underhive Wars and the “What’s Next” event on February 1st and 2nd that we also have very, very little to bring you here for the game. Pretty much outside of it being a turn-based tactical RPG title in the setting of Necromunda there isn't much more to say. I am not sure why there was a huge fuss to get the announcement out now when it could have been better suited in a few weeks, but there you have it. I am sure that a bunch of the table-top players out there just became overly excited and will need to change their under garments now. At least that would be the best assumption here.

Necromunda: Underhive Wars is a turn-based tactical RPG. Rival gangs of ruthless warriors are locked in an endless war for control of the Underhive, a gigantic warren of derelict factories, rusted metal husks, and forgotten technologies. Anarchy, violence, betrayal and death rule this hellish place, long forsaken by any semblance of civilization.

“Rogue Factor’s collaboration with Focus and Games Workshop is a story of trust, hard work, and true passion for the Warhammer Universe. Our adventure began by building the foundations of Mordheim: City Of The Damned Early Access. Regarded as a highly successful and well-executed endeavour, the Early Access of Mordheim: City Of The Damned gathered a vast number of passionate gamers that helped foster an amazing community and improved many aspects of the game. After a strong launch on PC and consoles, and an incredible experience with many lessons learned, the way was paved for our next step in conquering the tactical RPG genre: Necromunda: Underhive Wars.”

“We are delighted to welcome Necromuda: Underhive Wars to the catalogue of great games based on our worlds and settings. Rogue Factor and Focus Home Interactive made a wonderful Mordheim: City Of The Damned game and having done such a great job they're clearly the right people to realize the nightmarish world of Necromunda. Now fans of this unique and highly influential IP will at last be able to pick up their stubber and search for cool archaeotech whilst wiping out rival gangs throughout the Underhive.”

What do you think about Necromunda: Underhive Wars getting the announcement in the wake of the other rather successful game from the studio? Do you think that it will be more than just your standard turn-based RPG or will it just be the basics with the setting that fans have silently been asking for? Are you also confused as to why we have the announcement here without much to show when there is a huge event in just a few weeks? Let us know your thoughts on it all down in the comments and feel free to discuss. When more for Necromunda: Underhive Wars is revealed though we will have it here. Be sure to keep checking back in so you can see what this game is all about.