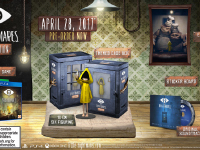 It looks like the date has been set and we now know when Little Nightmares will be hitting our PS4, Xbox One, and/or PC. Tarsier Studios has been hard at work to get us a really cool and creepy title to play here and it looks like we will all be diving in and watching Six die, or not, on April 28th here. The or not really refers to your ability to navigate the poor girl through the world of Little Nightmares and make sure she doesn't die and not the actually picking up of the game. It looks like a bunch of great titles we've all loved crammed into one big game with an amazing aesthetic so I'm pretty sure that many of us will at least give the game a try if not full purchase when it finally lands.

Just in case you are not fully up to date on what I am talking about here for Little Nightmares, then let me present you with the most recent trailer for the game. It takes us through a few of the lives we will get to see snuffed out if our gaming ability is lax and poor. Remember these are virtual characters we need to care about in a world we are only a voyeur in with a few god-like powers of the beings. You monsters…

Of course with the announcement of the release date also comes with it the announcements of collector's editions for Little Nightmares as well as pre-order bonuses for the game. It's a normal that we need to get out of but it is here for now none the less. As it looks here, those who pre-order can get their hands on some new in-game masks, the original soundtrack, and a theme if you pre-order the PS4 version of the game. In terms of the Collector's Edition, which is currently only available out of GAME retail, you can look forward to getting a poster for Little Nightmares, a sticker board, and a 10 cm figurine of Six that also comes with a themed cage box to store in. Also the original soundtrack but I'm guessing that isn't much extra as you'll be pre-ordering it now and that will come none the less. Bandai Namco Entertainment UK and Tarsier Studios are pleased to announce today that Little Nightmares will release on April, 28th in digital and physical format on PlayStation 4, Xbox One and PC.

Little Nightmares can now be pre-purchased digitally on PlayStation 4, Xbox One as well as GOG.com and Steam for PC. By pre-ordering digitally, all players will receive The Scarecrow Sack and the Upside-down Teapot Masks to help Six blend in with the other inhabitants of The Maw. PS4 and PC users will also receive the original soundtrack in digital format, an exclusive PS4 theme or a PC wallpaper featuring The Janitor. A standard boxed version, including the Original Soundtrack, is available at all good video game retailers. The Six Edition is also available for pre-orders as a collector’s edition exclusively at GAME retail, while supplies last. The Six Edition includes a 10 cm high figurine trapped in a themed cage box as well as the original soundtrack composed by Tobias Lilja from Tarsier Studios, an exclusive A3 poster and a sticker board.

What do you think of Little Nightmares now that we have seen a bit more of the game in action and have a date to look to? Does it fit alongside your preferences or will it be a title you may be skipping on as other titles are in the wait? Do you think that the collector's edition of the game will hit other retailers or will it be a soul exclusive as it is right now? Let us know your thoughts on all of this and then feel free to discuss down in the comments. As more for Little Nightmares is released though, we will have it all up here on the site. Be sure to keep checking back in as you won't want to miss out on any of it as it comes.