Ghost Recon Wildlands Will Have Some Interesting Music Mixed Into The Game
by David 'Hades' Becker [ Wednesday, 11th of January 2017 - 08:00 PM ] 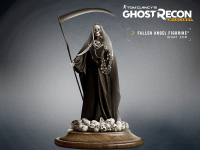 This is going to be another two-for-one kind of deal here for Ghost Recon Wildlands as it looks like we have another behind the scenes video that isn't generally enjoyed by most but it will be followed by a new reveal that is pretty easy to get stoked about. At least it is for me. But first we have a look at just who and how the music is being composed for the game between Ubisoft and Alain Johannes. The second name may or may not be familiar to you depending on your music lore but he would be one of the musicians from Queens of the Stone Age among other many other bands. None the less, he is here to help compose the music of Ghost Recon Wildlands as well as some of the basic ambient sounds we'll here in game.

While it may not sound too exciting here for Ghost Recon Wildlands it is interesting to note that all of those involved here look to have taken great care in recreating the world that the game is supposed to be set in. It seems a bit odd to me that everyone in the populace there have some want to have a musical instrument around them at all times but it is what it is and I am by no means a world traveler to know better. None the less, it looks like they are going out of their way to make sure that shines through and the culture is a bit preserved. You know, so we can shoot it up and cause all kinds of havoc to them during our plays of Ghost Recon Wildlands when it finally lands.

Ghost Recon Wildlands — The Music Of The Wildlands

Watch as Alain Johannes, a veteran musician from Queens of the Stone Age, Them Crooked Vultures, and more, dives into how he created the soundtrack for Ghost Recon Wildlands.

If that little bit wasn't interesting enough for you then let's get into the next little bit for Ghost Recon Wildlands and that would be a new figurine that Ubisoft has for us to pick up for the game. This would be the Fallen Angel statue from the game that is seen as a symbol of protection in the game's world. It is also something that holds meaning for the cartel we'll be taking down and soon we will be able to have it for ourselves. At least on March 7th when Ghost Recon Wildlands launches you can as that is when it is slated to hit the Ubicollectibles store.

I really love this roughly ten inch figurine in general that even if it wasn't linked to Ghost Recon Wildlands I'd be looking to pick it up. At least if the price wasn't too outrageous. That is something that at the time of this posting is still not listed on the site for pre-order. Here's to hoping it will be reasonably priced so I can add it to the collection of death symbols around the game cave…

Ubicollectibles presents its new creation: The "Fallen Angel" figurine, directly inspired by the iconic statue of Santa Muerte, a symbol of protection in the fictional world of Ghost Recon Wildlands. This divine figure is both feared and revered by the members of the Santa Blanca cartel.

So what are your thoughts on what we have coming here for Ghost Recon Wildlands with the music and such? Does it seem odd to you to see a culture where everyone is musically driven or is this a bit of a stretch for the game's world? What do you think about the Fallen Angle figurine that we will be getting here soon? Let us know and then discuss down in the comments. As more for Ghost Recon Wildlands is revealed, we will have it here. Be sure to stay close to the site so you don't miss out on any of the announcements big or small.