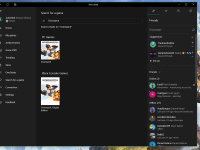 As if PC Gaming wasn't already top-notch, it looks like there is a new Game Mode in the works for Windows 10 that is going to make it even better. How is that? Well if the reports are true then this new mode is going to minimize the resources running on your system when Game Mode is activated and direct that saved potential toward making your games run smoother, faster, and look much better. At least if you have a system that can do all of this in the first place. This isn't some huge miracle patch that will change your hardware after all.

This new Game Mode option for Windows 10 was spotted out there in a leaked version of the 14997 build that is in the works. A new DLL file was mixed in called "gamemode.dll" and upon further inspection it was found that it will force the operating system to reallocate resources to prioritize which ever game is running at the time. At least that is the short and dirty version of it all. None the less it sounds like something that will definitely help out with some of those resource hog titles out there so that more gamers can run the game as intended.

.@h0x0d looks like Windows will adjust its resource allocation logic (for CPU/Gfx etc.) to prioritize the "Game" when running in "Game Mode"

If this sounds familiar then do know that it is a bit. This new Game Mode sounds like it will act similar to features that run on the Xbox OS currently. At least on the Xbox One's current build of the OS. This has been a feature that I am sure most PC gamers have wanted since they saw it possible out of Microsoft and now we have to just hope it works will all games running on the system and not just those coming out of the Windows Store. There is still no word on if Game Mode will work with games from Steam, Origin, or other options out there. It would make sense that it would but for now it's only looking like the native titles.

What are your thoughts on this new Game Mode that will be coming to Windows 10 here? Do you think it is about time given that their other systems already have something similar running? Do you think it will be only for those titles coming out of the Windows Store or will it help run any and all Win 32 games that we have at our disposal? Let us know down in the comments and then feel free to discuss. I am sure there will be more on this new Game Mode in the near future and when there is more, we will have it here. Be sure to keep checking in so you are completely up to date.