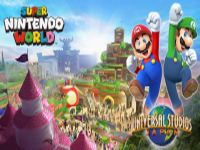 If you are one of those gamers who like to plan ahead then get your planner out right now as it looks like Super Nintendo World will be coming at us sometime before the Summer of 2020. At least to the Universal Parks in Japan as it has been announced that the aim is to get the addition built, staffed, and open before the 2020 Tokyo Olympic Games. Only a short three to four year wait and such but it's still better than just saying "it's coming" over and over. Especially for all of those huge into Nintendo who want to head to the park and experience it all sooner rather than later. Now you will have your chance so get booking now as I'm guessing that is going to be one crazy month out there in Japan given that this is not the only major thing going on for the Summer.

To go along with this announced, we also have a bit of concept art on what the developers out there are looking to bring to the park itself. At least in terms of Super Mario as that is all that is shown here even though it is claimed to be a Super Nintendo World and not just a Super Mario World. Although I going to guess that other classic franchise will be thrown into the sides of restaurants, shops, and possibly shows with the Mario brothers getting all the solid rides and attractions. I mean, Mario Kart just seems like it would be a no brainer here although we can hope for a Donkey Kong Country mine cart roller coaster of sort can't we? It makes just about as much sense as well. So would a nice horror attraction featuring Metroid but I'm not the one making the plans here.

Here's the most recent update on what is going on with Super Nintendo World for you to look at though. The bulk of it all goes into number of jobs being created and the fact that they are looking to drop about $450 million USD for this addition into the Universal Park here. I know I'd be looking at a fun way to bring in an obstacle course that plays out like a version of Zelda or even Super Mario if I was in charge of Super Nintendo World but for now I'll hope they see my words on this little site. Gamers know what they want sometimes… Super Nintendo World is coming to Universal Studios Japan and will be the first such opening in the world, featuring globally renowned characters and game worlds from Nintendo. Super Nintendo World is targeted to open in time for the 2020 Tokyo Olympics. While Universal Studios Japan will be the first location to open, Nintendo themed areas are also coming to Orlando and Hollywood as announced by Nintendo and Universal Parks & Resorts on November 29, 2016.

Super Nintendo World will be comprised of expansive and multilevel environments filled with unprecedented, state-of-the-art rides, interactive areas, shops and restaurants, all featuring Nintendo’s most popular characters and games. Development cost at Universal Studios Japan is currently expected to exceed 50 billion Yen. Super Nintendo World will be developed mainly using the park’s current parking area and part of an area designated for future expansion. Katsuhiro Miyamoto, Professor Emeritus of Kansai University estimates that Universal Studios Japan — after opening Super Nintendo World — will bring economic benefits following its opening of approximately 6.2 trillion Yen for the Kansai region, 11.7 trillion Yen for Japan as a whole, and will create approximately 1.1 million jobs in Japan within a decade after opening. Universal Studios Japan will introduce the wonder of the world-class, Japan-based entertainment brand of Nintendo not only to Japan but to the world.

Super Nintendo World will feature characters and themes from the “Super Mario” series, which has continued over the years to win the hearts of devoted fans around the world. The attraction area will also feature a variety of other globally popular Nintendo characters. Nintendo characters and the worlds they inhabit will be re-created at the highest level of quality through the strong partnership between Mr. Shigeru Miyamoto, Creative Fellow at Nintendo, and Mark Woodbury, President of Universal Creative, renowned for creative and technical excellence. Super Nintendo World will allow guests to fully immerse themselves and all five senses in the worlds of Nintendo, and is expected to attract guests from Japan and the world over.

Will you be trying to make a trip out for this Super Nintendo World come the Summer of 2020 or will you be waiting for the final date and the bugs to get worked out? Do you think this kind of gives a timeline for the Hollywood and Orlando parks to get their versions up and running? Do you think the world will still be around at this point for us all to head out and enjoy the fun? Let us know down in the comments and discuss. A more on this Super Nintendo World is revealed or discussed, we will have it here for you. Be sure to keep checking back in so you can keep completely up to date and make your plans accordingly.