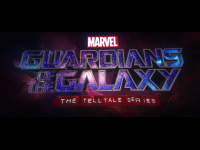 And just like that all of the Guardians Of The Galaxy rumors were true as it looks like the game is officially in development and slated to hit sometime next year. I'm going to go on a limb and say that Telltale Games is going to aim for a May release for the game as it would sync up with Marvel on the film's release but as the two are not connected outside of characters they may go down a different path. None the less, we have a Guardians Of The Galaxy game coming from Telltale and we also have a nice little teaser for it all. All of you fans out there can begin your rejoicing. Or you can wait a bit longer.

All of this comes right out of last night's Game Awards show where the following teaser for Guardians Of The Galaxy was shown to an eager audience. Thankfully with a completely different song than Hooked On A Feeling for once as well. Although it does look like there will be a lot of things borrowed from the feature film that worked well based on just this teaser alone. That could be different as this is all just one big tease but at least we can sit back and know that it is coming. Have a look at the following trailer for Guardians Of The Galaxy for yourself though.

Guardians Of The Galaxy — Official Teaser

"The energizing blend of humor, emotion, teamwork, and full-on sci-fi action-adventure of the Guardians provides an enormously satisfying space to explore through Telltale's unique style of interactive storytelling," said Kevin Bruner, Co-Founder and CEO of Telltale Games. "In Guardians Of The Galaxy, players will take on multiple roles within the ragtag band of heroes, and take the pilot's seat in directing their escapades around the universe. We are always honored to be working with the best creative partners and storytellers in entertainment, and working with Marvel on this series leaves us excited to share what we've been developing when it premieres in 2017."

"With story at the core of everything that Marvel creates, who better to team with than master storytellers Telltale Games," said Jay Ong, Senior Vice President, Games & Innovation, Marvel Entertainment. "Guardians Of The Galaxy fully showcases Marvel and Telltale's rich legacy of storytelling, and fans will find themselves immersed in an original, character-driven narrative. As part of our strategy to establish a new standard for Marvel games, this is certainly among the great titles to come."

While the trailer may not have had much in it, it does look like there may be some hints as to what will be going on in this version of Guardians Of The Galaxy. First off, it will be the traditional five episode affair that we've seen from Telltale time and time again. It will also get a retail version of the game that will be like the other titles that the developer has put out there. Also, if you read into what is stated above, we could be looking at a game that will have us playing Guardians Of The Galaxy like Game Of Thrones or Tales From The Borderlands. We will be taking on the role of all of the team apparently and I do hope that means that each will get their time to shine and not just be lumped together all the time.

How excited are you to see that Telltale and Marvel are working on a Guardians Of The Galaxy title for us? Do you think that we will get to play as all of the characters as hinted at or will we just make grand choices for the overall group that they play out like in The Walking Dead? Do you think that it will tie into the cinematic universe or will they keep it completely separate so they can tell their full story? Let us know and feel free to discuss down in the comments. As we get more on Guardians Of The Galaxy we will have it up here on the site. Be sure to keep checking back in to make sure you are completely up to date on it all.