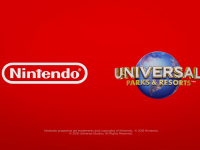 Last year we all caught wind that Universal Parks & Nintendo were teaming up to bring a lot of our favorite titles to the parks in a new themed area. If you don't remember, that is okay as the original announcement was made back in May of 2015 and a lot of things have transpired since then. Both in the world of Nintendo and that of the individual Universal Parks out there. I mean, the Hollywood park did just open their version of the Wizarding World this year so who can keep up with all of the other IPs that are being lined into it all? Thank the gods that we are here to keep you in the know…

Anyways, here we go with a new update on the Universal/Nintendo partnership and their vision of how the IPs will be incorporated into the different parks. At least the Osaka, Orlando, and Hollywood parks as it seems but that does give a lot of options for fans who want to go and check whatever is coming out. Sorry to seem vague there but as it turns out, all we are getting here in terms of an update is the fact that the "Nintendo Land" is still coming and will help us all feel like we just walked into a real world version of our favorite games. Plain and simple there isn't much more but a flashy video down below and the news that they will try to keep all of the attractions open for those of any age at heart. I'm sure it will still be the "safe" IPs but at least they are trying.

Universal Parks & Resorts And Nintendo Will Bring The Fun Of Nintendo To Life With Expansive, Highly Themed Environments At Osaka, Orlando And Hollywood

The creative visionaries behind Nintendo’s legendary worlds and characters are working together with the creative teams behind Universal’s blockbuster theme park attractions. Their goal: to bring the characters, action and adventure of Nintendo video games to life within Universal theme parks. And to do so in new and innovative ways that capture what makes them so special. All of the adventure, fun and whimsy you experience through a screen will now be all around you – in breathtakingly authentic ways.

When you look at this further it really is just another update that Universal Parks & Nintendo are still working on things. I'm sure we will see Mario and the Mushroom Kingdom all over the place. Most likely a Link and Zelda themed thing. If they are feeling saucy and dangerous maybe we can see a Metroid thing mixed in but I don't have high hopes for that as it is pretty clear that there will be shops and restaurants mixed in and "multiple attractions." If the other additions have anything to show for them, it will be two attractions based on something safe and then a whole lot of ways to separate you from your money in themed shops and eateries. I'm not seeing any darker IPs getting mixed in easily and more retro ones will be.

What are your thoughts on this latest "update" from Universal & Nintendo on the theme park additions? Do you think it will bring us all the favorite IPs or will it stay with the "safe" ones that non-gamers will still identify with? Do you also agree that we will most likely get two attractions and a whole lot of shops like many of the other "lands" that Universal already has out there? Let us know your thoughts and hopes down in the comments and feel free to discuss. Once we get a solid update on this Universal Parks & Nintendo partnership we will have it up here on the site. Be sure to keep checking back in so you don't miss out on that; if it is something to truly write about.