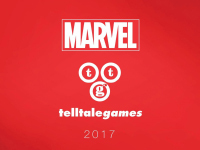 If you put on your "way back" hat you may remember the announcement that Marvel and Telltale Games were going to be working together to bring us a new story set in the massive universe they have to play in. Nothing was set in stone or defined out at that time outside of the plan to bring whatever title the two were working on to market in 2017. That year is closely approaching and we still have not heard which Marvel IP this could be revolving around or any real update to it all. Granted, the same thing happened with Batman but that's not what we are here to speak on. Especially since we may have accidentally found out what we could be getting.

For those not in the know, there is still a strike going on with SAG-AFTRA over voice actors getting better wages and all of that jazz. It is a thing and there are still some games and companies out there who have yet to strike a deal on all of this. There was a list compiled and on said list just happened to be Marvel's Guardians Of The Galaxy. Not only that, but the same company attributed to that title is also linked in to the third season of The Walking Dead; another IP from Telltale which we should already know is coming here soon. Of course said company could just be representing multiple titles and such and there is no foundation here but it seems pretty likely.

To add to this Marvel and Telltale conspiracy theory we have here, it also makes sense that this would be the big title between the two given the launch of the new Guardians Of The Galaxy film coming in May of 2017. Of course given the track record for Telltale Games when it comes to these great stories they wouldn't need the synergy of the film to help boost game sales but it does seem like a good plan to have. Even if the game launches and ends before the film; or even after. There will be huge buzz for it and it would be another way to connect everything in the Marvel universe just a bit more. It could also do what The Walking Dead: Michonne did and help flesh out a few things that couldn't be placed in.

Again, this is all speculation based on a new list of titles for here for the whole strike so this could be nothing more than another Marvel game being made and not the one by Telltale. I'm still hoping the real title there would be a Punisher one or a Thunderbolts one but there is some compelling arguments to be made based on what we have here that I will be let down. At least let down in terms of the IP they are building with and not that they will build a crap game. Hopefully we'll find out at The Game Awards here as the other rumor out there is that we'll see the announcement there. I guess we'll see.

What are your thoughts on the Marvel/Telltale title being in the Guardians Of The Galaxy realm? Do you think this all points to a confirmation of sorts? If not, what other IPs would you like to see get the amazing story treatment that we know the developers can and are willing to do? Let us know all your thoughts on this and feel free to discuss in the comments below. For more on the Marvel and Telltale Games collaboration though, be sure to stay right here as we'll keep digging until we find out exactly what we could expect from the two next year.