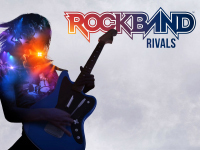 When I saw that Rock Band 4 was going to be a thing I became overly excited and prepped to get back into the swing of things. I was glad to see Harmonix bringing back one of the franchises I loved to play; and back on the PS4 and Xbox One. Then things fell a bit flat for me. Like something was truly missing from the game. Now we flash forward a year later and Rock Band Rivals is here to expand on the overall experience and hopefully make the game better. We had a chance to give this expansion a play and are here now to give you the full review of it all.

After our previous excursion into fame with Dwarf Cooter, my band, it looks like the people want to know just where things all started and how they made it to where they are now. Not all journeys are nice and easy and neither was their journey and we get to see and play it all out in Rockudrama manner. How did Dwarf Cooter form? What were their hurdles? How did they become the legends we all know them to be now? These are all answered along the way…

While Rock Band Rivals brings with it a lot of extra content and ways to play the core game, it does seem like Harmonix forgot to update or fix some of the other main issues with the core game along the way. One of the bigger issues I always ran into is the UI for the store and song selection screens. These could be fixed outside of a full expansion but they don't even seem to have been looked at here and it really does take a few things away from Rock Band 4 when you can't navigate through with any ease. Were these things on the list for Rivals? No. Could they have been addressed in the mix? Most definitely but it just wasn't the case.

Thankfully the UI stuff is where the hate for Rock Band Rivals ends as the rest of the expansion adds some great features that made the game playable for me. Specifically the addition of the Rivals Mode and the Rockudrama. Granted those were the two big additions in general but both of these modes not only gave us more content to play and experience but also gave us a true way to give the game a point outside of YouTube FC videos and random party game for those gamers who want to have the rock star life. If both of these would have been in the original Rock Band 4 I think it would have done a whole lot better.

Also, and maybe this was just me, but it felt like the calibration and responsiveness of the game was kicked up a few notches here with Rock Band Rivals. I've been poking my head back into RB4 since launch and it always felt sluggish and un-responsive which would lead to more and more frustration each time. This truly feels like the game that I loved before and wanted last year. Even with my legacy instruments it feels like things have been perfected enough so all of us can experience and enjoy what they game has to offer instead of taking turns on the new hardware and ignoring the old for yet another day.

If you picked up Rock Band 4 and launch and were let down a bit or you were holding out for the bugs to get worked out of it, then now is the time to make the jump in. Yes, the UI for getting around the game still feels a bit off and could use some improvements but this is definitely the version of the game that I think Harmonix wanted out there last year. The extra "story" mode adds some great fun to it all outside of just free play and now we can compete against each other in teams. This is the version to buy and I encourage you to do so now if you haven't. Or at least pick up the Rock Band Rivals expansion and give it all another go again. I don't think you'll be let down.

I give Rock Band Rivals 5 Gold Stars on the Gold Star scale.

Rock Band Rivals was developed by Harmonix and published by Performance Designed Products for the PS4 and Xbox One on October 18th, 2016. A digital PS4 copy of the game was provided by the publisher for reviewing purposes.