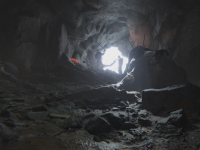 It is always interesting to see where some developers go after they leave other big projects and it looks like Project Wight is the next game to jump into this category. This is the new title coming from a new development team named The Outsiders and it looks like they are taking that name a bit to heart on what we have here for the first "sneak peek" of their project. Project Wight seems to be the working title for the game right now and just as we have a working title to work with we also have very few details on what this game is going to fully entail. That is of course if we want to discount some of the information in the below video for the game. We wouldn't want to do that now would we?

In Project Wight it looks like we take on the role of what would normally considered a monster in video games. The difference here being that we are playing a creature who has been hunted and killed into near extinction by the humans and they just want to survive. For the most part that is what we have here. There looks to be different ages for these creatures we get to control as the video here shows a young creature who needs to run from everything to an adolescent one that looks a lot more capable and the beginning of something truly terrifying for the humans. Maybe this is why they are hunted into near extinction now. Just maybe…

Project Wight is the codename for the first game from independent studio The Outsiders.

The Outsiders are lead by David Goldfarb, former Lead Designer on Battlefield 3 and Game Director on Payday 2.

It is interesting to see a game that, while it may not be the whole plan, will take us on the other side of the conflict that is usually present in our games. Monsters are creatures too and if they are anything like our animals of the day then they have their own structure and even feelings. While Project Wight may not be targeting to tell that kind of story I think just the fact that we are the other side of things will make it feel like something we've never played before and I am completely interested to see where it goes. Hopefully a lot sooner than later of course. But The Outsiders are still a small team so who knows?

What do you think about Project Wight as it stands so far? Do you see the same interesting story that could be told here or will it boil down to the same kill or be killed kind of game? Do you think that there will be a part where we play an elder and thus the "end boss" of another character's tale? Give us your thoughts on it all down in the comments and discuss. As we see more for Project Wight and it evolves into its next form, we will have it here on the site. Be sure to stick around as this could become something we all talk about for a while.