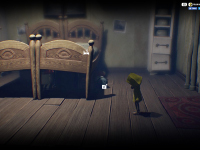 Not that long ago we had a nice little teaser for a new game called Little Nightmares. It was nice, short, and gave us a small taste of what Tarsier Studios is aiming to bring us Next year on the PS4, Xbox One, and PC. It was a nice taste but really only showed Little Nightmares as a platforming title that looks to use a lot of Tim Burton's visuals; at least at first glance. We aren't the only ones who see it this way but that may have been the thought so Bandai Namco has put together a nice little interactive experience for Little Nightmares to give us a better showing.

You can see this new experience for Little Nightmares just below or go to the official site for it at escapekitchen.little-nightmares.com. No matter which option you go with you'll be greeted with a fun little interactive video of sorts that will let you point and click around a level of the game to tray and escape the kitchen. At least that is the name of the URL so it is safe to make that leap of logic that this would be the core objective outside of giving us a feel for the game.

Little Nightmares presents a dark yet whimsical tale that will have players confront their childhood fears as they help a girl dressed in a yellow raincoat escape the jaws of The Maw – a vast, mysterious vessel inhabited by corrupted souls looking for their next meal!

I've played through some of the scenes here for Little Nightmares and I do have to say that even though this is a point and click adventure and not the platformer we're supposed to be getting, I think it does nail it on the head in terms of the theme and tone the game will have. Of course this is all promotional stuff so the whole experience could be something completely different but I can visualize how Tarsier Studios looks to be handling it all from this. Something that isn't generally the case when we get things like this for other games out there. It looks like someone wants Little Nightmares to truly succeed to me.

What do you think about this new experience for Little Nightmares? Did you give it a try past your first "death" or did you skip it completely? Did you make it all the way through and wanted to see how each other choice played out here? Let us know in the comments and discuss. For more on Little Nightmares as it comes, be sure to stick right here as we'll keep all of it flowing out to you as we can dig it all up.