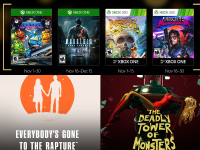 A new month is almost on us here with November and that means new video games that we are going to get for free. Well video games that you will get for free if you are part of the PlayStation Plus or Xbox Gold services. If you are then you may be in for a treat as the list of titles going live starting next month is here and we have it for you. Again we get to expand out titles on the Xbox One and PS4 without needing to make any extra spends at our local stores.

Finally we get a smattering of amazing and 'meh' video games for both platforms here. I personally loved Murder: Soul Suspect and only wished it was a bit longer; but now that it is free it doesn't matter as it is worth the time put in. Then on the PlayStation side we have two video games I have yet to play but have always heard good things about. That being Everyone's Gone To The Rapture and Costume Quest 2. Looks like I'll have my chance to give these games a go now and I couldn't be happier. Hopefully December will be just as strong…

Here is the list of games we will all get for our PlayStation systems starting on November 1st of 2016.

Here is the list of games we will all get for our Xbox systems starting on November 1st of 2016.