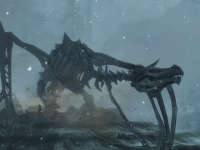 A new gameplay trailer for The Elder Scrolls V: Skyrim Special Edition is here and it shows how well Skyrim has been enhanced for this gen

On October 28th a portion of gamers out there who happened to miss out on The Elder Scrolls V: Skyrim will be able to give it a go on the PS4, Xbox One, and PC. Or for those long time fans of Bethesda's franchise, you'll be able to dig back into the game's world yet again with all of the upgrades expected for these systems and the DLC that has been released so far. The world of Skyrim is going to be overrun yet again but this is of course a good thing. Well a good thing if you are not one of those nameless NPCs that are going to get murdered for the LOLs and/or have all of your stuff looted…

Anyways, with just about a week out from the launch here, it is a good time to take a look at the visual upgrades coming to Skyrim and just how much more rich the environments and characters are going to look and feel when we trounce on through. That is what the following video is here for. All so you can see what we thought was groundbreaking on the last gen systems become all beefed up for the current gen ones. That alone should make the whole thing worth another purchase, right? I guess we'll have to see.

Have a look for yourself though and be the judge. Then see if you'll be giving The Elder Scrolls V: Skyrim another purchase and spending even more of your time running around and slaying the weak and sometimes innocent…

Epic fantasy. Stunning details. Winner of more than 200 Game of the Year Awards. The Elder Scrolls V: Skyrim returns with Skyrim Special Edition, available for Xbox One, PlayStation 4 and PC on October 28. Along with the critically acclaimed game and add-ons, Skyrim Special Edition has all-new features like remastered art and effects, dynamic depth of field, screen-space reflections, volumetric god rays, and more. Watch the new trailer to see Skyrim Special Edition in action.

What are your thoughts on the upgraded visuals for Skyrim here? Do you see this as enough to get you to drop more cash on the game or would this be your first time experiencing it all? Do you think that this is going to lead us to yet another addition into the franchise? Let us know your thoughts and discuss. If we get more on The Elder Scrolls V: Skyrim Special Edition here, we will have it up on the site for you. Be sure to check back and often to see if there is anything more as we get into the release window of the game.