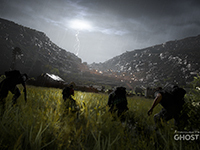 There was a lot of shock and awe back when we first saw the live gameplay for Ghost Recon Wildlands during the E3 conference. It was one of many ways that Ubisoft is going to allow us to tackle the missions set forth when it launches on March 7th of next year. This is all fine and well but it would be nice to see some of those other methods in action for Ghost Recon Wildlands even though we've had the nice explanations of it all being something we can do. On top of that it would be nice to see some of the dynamic weather and lighting going on the game to see just how we can use it all to our advantage to silently take down our enemies.

Of course you wouldn't be here reading this drivel if we didn't have just what we were asking for up above now would you? That is just what we have a little bit lower down for Ghost Recon Wildlands as it is the mission we saw during the event in June only at night, under heavy rain, and all trying to be as quiet and ninja-like as possible. An insane but fun feat to see in action. That said, I'll let you at it so you can see just what we have here and what to expect out of the game once it launches. You shouldn't be let down at all. Hopefully…

Tom Clancy’s Ghost Recon Wildlands offers total freedom of choice in the way that you can complete your missions. For this new walkthrough demo, the Ghosts waited for nightfall in order to take a stealthy approach.

I have to say that this all looked absolutely amazing even though it was a bit on the dark side. Dark as in hard to see what is going on at all times but I can totally see just how that helps out in Ghost Recon Wildlands when taking on missions. I am a bit curious as to why the team didn't exit the mission the same way they got in with the hostage hidden in the truck with the team. Maybe it was a little anticlimactic for it all but it would have made more sense if it was at all possible. Maybe that is the case here even though we can easily see other vehicles can house the whole team plus one without issue at all. Interesting right?

What do you think about the new stealth play that we have here for Ghost Recon Wildlands? Do you agree that everything looks amazing although rather dark in the end? Do you think that this mission play went the way it did because of mechanic limitations or to make everything just a little more exciting? Let us know your thoughts and feel free to discuss in the comments below. For more on Ghost Recon Wildlands as Ubisoft doles it out, be sure to stick right here as we'll keep bringing you everything that we can as we get closer and closer to the release of the game.