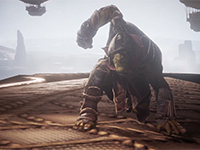 Delays have hit Styx: Shards Of Darkness until next year but with it comes a new look at Styx and some of the upgrades that will be coming with this game

It looks like my worries were true as it looks like Styx: Shards Of Darkness has been delayed until Q1 of 2017. I thought this might happen as we got closer to the original timeline that Cyanide Studios wanted to hit but as we had not heard much on the development of the game before now it was looking like a delay was inevitable. Not to tragic of news for a lot of gamers I know as Styx has been more of an underground kind of game already, pun intended, but as the team has been upgrading to the Unreal 4 engine for this game they and Focus Home Interactive though the delay was needed and I am going to side on this for sure.

Now that the downer news is over here, let's move onto a bit of the new stuff for Styx: Shards Of Darkness. We have a nice new bit of gameplay to look at here and it shows off some of the great upgrades that the game is still undergoing in terms of engine but also in terms of features that will hopefully expand the overall fun of the game. There is a lot of stealth and a lot of killing that has made its way over from the first Styx game for sure, but now it looks like we have a crafting system and it looks like the team is giving us a lot of different ways to approach missions and levels. This could just be how the video was clipped though.

Also, while not completely new here, we get a look at a few of the other new abilities coming to Styx: Shards Of Darkness that I know I wished were in the first game. Like the ability to spawn a clone somewhere other than where you stand and also the ability to possess it and claim its location as your own. This was shown before in other trailers for Styx: Shards Of Darkness so it's not that new but here we do get a good look at a new use of it all. Also in tandem with the crafting mechanics in the game. Have a look and see how it is all progressing so far.

In search for the Ambassador's magical scepter stolen by a shape-shifting elf, Styx must infiltrate a diplomatic summit through clever use of the environment and new crafting abilities. A new feature, crafting, enables Styx to use more abilities, such as throwing a cocoon large distances enabling him to teleport into a newly hatched clone of himself.

The series' lauded verticality returns, with many choices of routes and tactics to take throughout the level. Stick to the shadows on the ground, avoiding patrols, or turn to the walls and ceilings to sneak past or attack from above. Kill, or subvert; the choice is yours - just don't be seen!

Are you upset that Styx: Shards Of Darkness has been delayed or do you also see the benefit here as Cyanide Studios goes through the upgrades? Do you think that this one will be just what we were all expecting before or will it just be another sequel with some better features? What other powers and abilities do you think we will get to see in the final game here? Let us know and feel free to discuss in the comments below. For more on Styx: Shards Of Darkness as Focus Home Interactive gives out the details, stay right here as we'll definitely have them all up on the site as quick as we can.