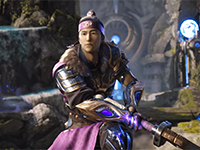 Tomorrow marks another day and another hero coming to Paragon for all of us to learn how to master and destroy everything else with. As Epic Games continues to build up the roster to crazy levels for the game we get what feels like another character we've seen before on the surface added into the fray. Of course I could be wrong as looks can be deceiving but we won't know until the next Paragon update goes live on October 4th for the PS4 and PC version of the game. Kwang is part of the free content that we will forever be getting as it seems so we can rest assured there at least.

So what does Kwang bring to Paragon here?

Well as it looks from the new trailer and the descriptions of the powers, he brings a bunch of sword wielding up-close-and-personal bit of combat into Paragon. Not that this is new for the game at all but it is another option and it does look like he gets some pretty powerful abilities to call forth lightning and explosions from the skies. Not only that but he has the ability to leech life off those who get to close to him during the match. By that I mean enemies as it would really such for him to steal the life of his allies now wouldn't it? None the less though, see Kwang in action just below and then wait for the Paragon update to land for us all.

Does Kwang seem like another great addition into Paragon or will he be overlooked for other characters quickly? Do you think that this shows a sign of Epic Games slowing down or losing their creativity? Do you think that this character will add something to the matches that have yet to be seen? Let us know what you are thinking and feel free to discuss in the comments below. For more on Paragon and all of the updates that are coming to it, be sure to stick right here as we'll keep bringing you all of them as they pop up or fall out of the sky.