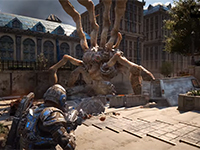 October 11th is almost here and that means that Gears Of War 4 is also almost here. I'm sure that The Coalition is starting to freak a bit as the date looms ever closer but at this point all they have to do is sit and wait to see how well it sells on the Xbox One and Windows 10 platforms. I'm going to guess rather well personally. Given the nature of the beast that is Gears Of War 4 though it looks like they aren't going to just kick back and wait as now they are here with a nice long bit of gameplay. In fact, we have a nice twenty minute spoiler for the opening of the game to look at and enjoy as we wait that last week or so for the game to launch.

Yes, that was your first spoiler warning as this is the real first twenty minutes of Gears Of War 4 to be looked upon here. It doesn't look like there were any fancy edits so keep that in mind if you think that they wouldn't spoil that much of the game right out of the box. Thankfully though for those who want to see the new footage and not be too terribly spoiled, this is more or less the tutorial portion of the game as well as a recap of what has happened over the course of the other games. All in video and playable form. No sitting through a twenty minute recap video as we get to actually play it and see some of the other events that led us to the point we are at in Gears Of War 4.

I am a huge fan of this style of prologue and tutorial in video games here and am glad to see that Gears Of War 4 is using this great tactic. It lets seasoned players get a nice feel for the new mechanics and a quick reminder of what they did before while also keeping the franchise open to new gamers who may not have had a chance to play everything before now. Gamers like myself who have always had the 360 never boot the original games for some unknown reason so they have been collecting dust on the shelf since launch. Just saying…

Join The Coalition's Rod Fergusson and Matt Searcy for the opening Prologue for Gears Of War 4 and play through the first 20 minutes of the game. Revisit the Sera of Gears past and learn more about the Sera of today, 25 years later.

Did you watch all of the new Gears Of War 4 footage here or are you still waiting for launch for it all? Do you like the way that they are presenting the "tutorial" for the game here or would you rather have something a bit more straight forward? What about the recap of the franchise up to now and how that was presented? Let us know what you are thinking and discuss away in the comments below. For more on Gears Of War 4 as we get closer to launch and beyond, make sure to stay right here as we'll keep bringing you all of the news that we can find.