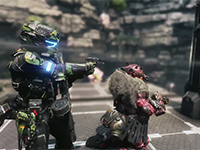 The last big update we had for Titanfall 2 was a solid look at all of the titans that we'll get to use in the game when it launches on October 28th for the PS4, Xbox One, and PC. They are some solid units there but are still only one half of the equation that Respawn has for us here and now we get to see how the other half spend their time. Although if you were part of the Titanfall 2 beta not too long ago you have a good idea on that but none the less EA wanted to make sure we were all in the know. At least as this game is concerned.

I'm not completely certain on what is trying to be promoted here or what new information we have for the pilots in Titanfall 2 but here we go. I do see a few more actions playing out here that I never saw in the beta but that could all just be how this trailer was cut and presented. Although it would be nice to see the pilots able to do more than just run and gun until they can call down their titans. Maybe that is what the end of the trailer here is trying to tease? Most likely not but it is something to ponder on as we wait for Titanfall 2 to finally launch.

What truly separates a Pilot from a grunt is the bond between Pilot and Titan. When linked to a Titan, a Pilot can only be stopped by an overwhelming force or an equal. Whether utilizing fire, laser, steel, lead or any other combination of force, Pilots take their full arsenal to the Frontier and Become One.

Relentless in battle, Pilots have been innovating on the Frontier for hundreds of years. Pilots don't fear progress. Pilots don't look to the past for comfort, they look to the future and forge their own path. With incredible technology at their fingertips, Pilots bring incredible innovation into battle and take the fight to new levels.

Any new thoughts on Titanfall 2 after seeing the new trailer and the new content? Do you think that we are going to get more of the cool kills mixed into the core of the game or was it all just cut this way? Do you think that the ending is pointing at a bit more coming or is that just false hope? Let us know your thoughts on it all in the comments and then discuss. For more on Titanfall 2 as it comes out, be sure to stay right here as we'll have the updates and I'm sure you'll want to see them all as they come.