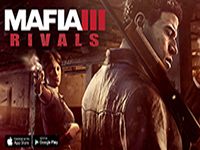 A new mobile game, Mafia 3: Rivals, has been announced and it looks to bring a little bit of Mafia 3 to our phones and tablets

Good news for all of you mobile gamers out there who are apparently not gaming on the PS4, Xbox One, or PC as Mafia 3: Rivals has just been announced and coming to the iOS and Android systems. No, 2K Games isn't porting over the full other game but it looks like Cat Daddy Games has crafted a mobile tie-in game to keep us going when on the move. I also think that stating this is a tie-in to Mafia 3 might be a little overzealous on my end too as it could be something a bit different. None the less it comes out the same day, October 7th, for those who want to try and have the well-rounded experience for the new game.

When I mentioned tie-in before I meant it in a way that ties the two games together but it doesn't sound like there is anything between this game and Mafia 3 proper. Mafia 3: Rivals is a battle RPG game that will use elements and locations from the core title to give you the feel but it will mostly be you trying to "run the streets" of the criminal underworld. How that will play out is still not dictated here but that is the core of the game. I guess it will tie you into the story if they did a great job at it but it more or less sounds like this is just a marketing app to get us to pick up the full title on our chosen system. Run the streets of New Bordeaux from your mobile device. 2K Games and Cat Daddy Games’ new mobile battle RPG, Mafia III: Rivals, hits iOS and Android on October 7, 2016. Experience the diverse and dangerous New Bordeaux from a whole new perspective – and a completely different way to fight your way to the top of the criminal underworld with characters, locations and events based on Hangar 13’s Mafia 3. Assemble your crime syndicate by seizing property, collecting loot (including weapons and vehicles) and defeating any rival mobs that interfere with your plans.

Begin your life of crime squaring off against rival gangs in battle RPG combat. Recruit and train 40 crime bosses from the Mafia III universe as they join your crew, and destroy any foes getting in the way. Outfit New Bordeaux’s newest hit squad with an assortment of deadly weaponry and other gear. Join up with friends and battle players worldwide to see who has the deadliest crew in New Bordeaux.

Does Mafia 3: Rivals sound like it is going to be something for you are you just going to aim for the full bigger game? Do you think there could be in-game rewards for playing this mobile title and it is just not announced yet? If this is a marketing thing do you too find it odd that it releases on the same day without a good head start? Let us know your thoughts and feel free to discuss in the comments below. For more on Mafia 3 and all of its deviations, be sure to stay right here as we'll have it all as it comes out. Maybe something solid for the core game soon.