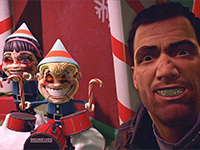 It shouldn't be too shocking that we are going back to the mall in Dead Rising 4 when it launches this December 6th. It kind of has been one of the big things that Capcom has been pushing for with all of their media content and campaigns so far. What says holidays more than Black Friday at the Mall and we are definitely getting an interesting version of it for Dead Rising 4. I'm sure that there are many other things we'll be getting for the game too but this is the big push and also what we have in store for you as of right now. As well as gameplay.

Below you will get to see some new gameplay for Dead Rising 4 that shows off a bit more of the mall in the game. It also shows us why food court zombies are just the worst. They do always screw up a really nice meal when one is just trying to relax and unwind. That all said though, it is also nice to know that the latest and greatest in high tech hardware is also in the mall for our use to make sure we get to have those relaxing moments for the zombies to come along and screw up. I guess it could be a win-win situation but I can see it lose-lose as well.

Enough banter though. Here's the latest look at Dead Rising 4 for us all and then we can sit back and wait for it to finally release on the PS4, Xbox One, and Windows PC on December 6th. I wonder if Capcom is going to have some kind of crazy Black Friday pre-order campaign set up for all of us out there to tie on into the game. Maybe they'll just post videos as I know some of those events are much worse than anything you are about to see below in the fictional game. Ah humans…

Dead Rising 4 — Return To The Mall

Frank West is back and in cracking form, as today Microsoft and Capcom Vancouver revealed the new gameplay trailer for Dead Rising 4. Titled “Return to the Mall,” the trailer brings fans back to Willamette Mall, where a recon mission quickly goes awry. From cleaving through zombies in the food court to pausing for a few creative selfies, Willamette Mall is a key piece in Frank’s search for the truth behind a government conspiracy responsible for the outbreak. Check out the action for yourself in the video above!

Dead Rising 4 marks an all new chapter of one of the most popular zombie game franchises of all time. All the classic hallmarks of the ground breaking zombie series return, including a huge array of weapons and vehicles players can combine to combat the horde ranging from the practical – to the practically insane. With intense action and an unmatched level of weapon and character customization, Dead Rising 4 delivers a heart-pounding experience as you explore, scavenge and fight to survive in an open world sandbox on the brink of the next zombie apocalypse.

Are you ready to go back to the mall in Dead Rising 4 or would you rather have a completely new location for it all? Do you think that this is going to be a commentary on the world as well as a fun game just like the films that inspired all of this? Why do you think that there will be power armor just sitting around in the malls here; besides just fun gameplay? Let us know and discuss in the comments below. For all things Dead Rising 4 though, keep your eyes glued here as we'll keep bringing you all of the news and updates that are sure to follow here shortly.