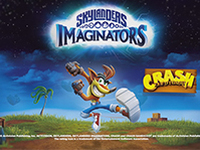 We've all known that Crash was coming to the PS3 and PS4 version of Skylanders Imaginators and if not then you know now. He will be coming to the game in form of one of the new Sensei characters that Toys For Bob have built for the game and through the seemingly close relationship that Activision has with PlayStation now. Of course Skylanders Imaginators is also coming to the Xbox 360, Xbox One, and Wii U on October 16th but this is the console exclusive we are talking about here and just like the last addition to the franchise we'll only be talking about the Sony version for now.

Well, Crash has just hit his 20th anniversary and it looks like Skylanders Imaginators wants to help celebrate it all with some new gameplay showing him in action in the game. All by showing twenty different ways that his franchise will be brought into Skylanders Imaginators for diehard fans and new ones who have no clue who Crash is already. Of course they are going to think he is just a new character for this franchise but hopefully there will be indicators for those younger gamers who have no clue still.

Have a look at Crash in action here for Skylanders Imaginators. I was able to spot all of the throwbacks to the original IP and hopefully you will as well. Have a look and then get ready to wait for the game to fully launch in about a month from now. Not long now.

See if you can spot 20 ways we’ve honored Crash’s past in the new Skylanders Imaginators level.

What are your thoughts about Crash coming to Skylanders Imaginators? Did you know that he was celebrating twenty years now? Do you think that the next addition to the franchise will have an Xbox specific character added in or will it only be who pays the most again? Let us know your thoughts and feel free to discuss it all down below. For more on Skylanders Imaginators be sure to come back here as we'll have more as it all comes between now and launch.