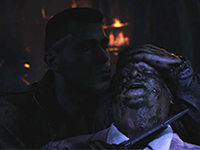 It's almost like we can't go a single week without something from Mafia 3 getting released that it looks like we're going to get to see the whole game before it launches on October 7th for the PS4, Xbox One, and PC. Thankfully Hangar 13 has done what they can to make sure the game isn't spoiled but we have some great looks at the game. I'm sure 2K Games is also happy with that and now we have another big video for Mafia 3 to gaze upon and this one shows off all of the illegal activities going on the game's world. All of which we have to take down and rebuild for ourselves at the end of the day.

We've seen a lot of them in past videos for Mafia 3 but now we get a solid look at the drugs, human trafficking, and violence that goes on in the background of the game. All done by the current Italian Mafia in charge but of course when Lincoln takes them down we have to hand them back out as revenge isn't the only thing he is out for. He's not doing any of this out of the kindness of his heart but so he is the one making the profit just as the way the world works. Have a look at it all in the second video in the series to have been released.

Episode 2 of our Mafia 3 gameplay series showcases mob rackets you can dismantle as Lincoln Clay.

In 1968, the city of New Bordeaux was a hotbed of criminal enterprise. In the second of six interviews, John Donovan responds to the US Senate Select Committee on Intelligence, shedding light on the pervasive and diverse mob rackets and hideouts that Lincoln Clay targeted for takedown throughout the city.

Does any of this shock you for Mafia 3 or is it new to you? Do you think that we'll have the option to permanently shut down the racket or will we always have to take it over in the game? Do you think that there is a topic that Hangar 13 isn't going to touch on here in the illegal world or is it all fair game? Let us know what you think and discuss in the comments below. For all things Mafia 3 be sure to stay right here as we'll be staying on top of it all as it comes. I know there will be a lot more here in the coming weeks and you won't want to miss out.