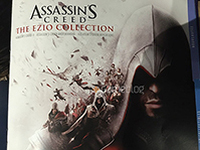 There were rumors and conjecture about an Assassin's Creed: The Ezio Collection coming out but there was no proof to go along with the murmurs. Not only that but Ubisoft was also completely silent on the matter and it looked like the rumors were going to die. That was of course until just recently where promotional materials for Assassin's Creed: The Ezio Collection has popped up on a French Gaming Blog and have some pretty interesting things to be claimed for the game. Like the fact that it will be out this November for the PS4 and Xbox One to start things going.

Below you can see the image that sparked it all but some of the description given will be that this will bundle Assassin's Creed 2, Brotherhood, and Revelations all in one spot and will sport 1080p resolution with 30fps to boot. Pretty much a standard thing for a remaster release but as it looks, there is more. Like some of the textures will have been reworked, all the DLC for the games that has come out and two short animated movies all about Ezio mixed in. So pretty much the standard as it goes with a few cool extras added in. Gameblog adds that according to their retail sources, it's a 1080p/30fps collection, with (some?) reworked textures, and would include all DLC and two animation movies about Ezio.

Target release date is November and they say "less than 70€" (full price).

Of course Ubisoft has yet to comment or confirm Assassin's Creed: The Ezio Collection is really a thing but the images and sources are claimed to be reliable. It also would allow them to launch an Assassin’s Creed title this year even though they said there wouldn't be a new one. Which would still be right as this isn't new but a remaster of an older version of the game that was so well received that it spawned to separate titles from the core one. I know I was a huge fan of the Ezio story and really hope this isn't some huge hoax. Time will tell of course.

Do you think that Assassin's Creed: The Ezio Collection is going to be a real thing or is this just a great joke? Would you want to jump into the Ezio story again or should that ship be left where it lays? Do you think the game needed a lot more than just some visual upgrades or will this be enough to make you pick the games up again? Let us know and feel free to comment below. As the story on Assassin's Creed: The Ezio Collection progresses, we'll have the updates here. Hopefully we'll get solid word soon if the collection is real but I wouldn't be shocked if it came a lot later.