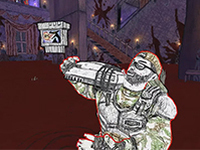 It's been a while since we've had the pleasure of writing about Drawn To Death and just how the game has been progressing. Bartlet Jones recently ended the closed access to the game and there were always things changing in the back-end for the game during that but nothing specifically selected to be given out to the public by the team. Well short of all of the streaming of the game and small video clips for Drawn To Death that we all have been putting out there. But for the gamer that has been holding off to give the game a play until its full launch then you will be glad to see two more characters have been added to the roster, a new map, and a whole lot of new content.

For those who have been balls deep in Drawn To Death this whole time, you'll know it all too well. Here we get a look at all of the four characters announced almost two years ago as well as Ninjaw and Bronco who have joined into the mix. Ninjaw being a half ninja half shark character that has abilities that mimic some of the things you could see happening in a game like this from a ninja and a shark. Bronco is a bionic commando of sorts who also has a few spirit related attacks and specials that call forth his fallen comrades in arms. Both played extremely well before the end of the limited access but look to have some great improvements added here.

Also in the mix here we get to see a new map for Drawn To Death's insanity to play out on. It is called Bloodbath and looks and feels just as you would think. We have a mansion with blood dripping walls that pool at the floor and also has a plethora of hidden passages and booby traps set up in the area. Yet another great addition into Bartlet Jones' title and can tell you that you'll love it all from a firsthand appearance. But you don't have to take just my word on it as we have it all in motion just below for you.

Here’s a sneak peek at the latest content from Drawn To Death, the brawler/shooter hybrid from Game Director David Jaffe. What’s waiting for you inside the pages of the notebook? Jump in and find out!

There's a new level called Bloodbath, a mansion where the walls drip blood and the secret passages are filled with ghostly booby traps, and two new characters - Bronco and Ninjaw. Check out these and more at PAX!

What are your thoughts on Drawn To Death so far based on the gameplay we've seen? Were you part of the limited access and played on the early versions of the map and characters? Will you be out at PAX and get to try it all out for the first time there? Let us know and feel free to discuss everything down in the comments. For more on Drawn To Death as it gets released you best know that we'll have it up here on the site. Be sure to stay right here for all of that as it comes.