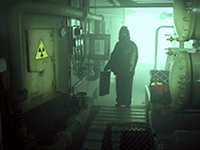 Back in July we had a nice look at The Bunker and just how this new live action video game will look and play when it launches. Now we get to see yet another video of "gameplay" for the game from Splendy Games and Wales Interactive to get us even more excited. The Bunker is slated to release sometime in September for the PS4, Xbox One, and PC. I wish I had a release date to bring you but sadly there isn't one yet. But hey, new video to get us all excited and a few more details on how the game was made.

To get you up to speed in case you haven't been following along to The Bunker since April, here's what the game is all about. This is a point and click adventure where we have live action video instead of digital gameplay to fill things in. All of which was filled out of a real decommissioned bunker in Essex, England. We take on the role of John who happens to be the last survivor in said bunker after the bombs fell and destroyed the world. He keeps his sanity by following a routine but we come in just as an alarm sets all of the events and maybe his downfall into motion. Or at least it shakes loose some repressed memories that he has to face as we investigate the depths of the living tomb…

In terms of game mechanics and how we'll interact with The Bunker, Wales Interactive has stated that it plays out a bit like Heavy Rain did only with live actors instead of digital ones. If that is the case, I am interested to see how button mashing scenes and actions will play out in the game as we could see the stress in the digital avatar but I can't imagine how that would be done using a recorded live actor. I'm sure that it will be interesting and now I can't wait for whatever day The Bunker will be releasing in the month.

In The Bunker, you play as John, a boy born in a secret nuclear government bunker on July 3, 1986 — the day the bombs fell. Thirty years later, everyone you knew and loved has died. You are the last remaining survivor. Your existence consists of following the rules and sticking to the routine, but when an alarm is triggered, your mind begins to self-destruct. You must venture deeper and deeper into the bunker, discovering long forgotten zones and uncovering dark, repressed memories that finally reveal the terrible secret of the bunker.

What are your thoughts on The Bunker as explained here? Do you agree that QTE type scenes would be something difficult to get set up using live actors or do you think it would be easier? What day do you think the game will release this month? Let us know and discuss everything in the comments below. For more on The Bunker as it comes out be sure to stay right here on the site as we'll keep bringing you all of the details as we can. Hopefully a release date soon…