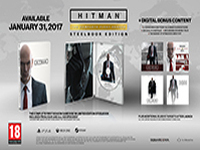 I know there has been a lot of gamers out there waiting to give the new Hitman a try until after all of the episodes for the game have been released. That would give Io Interactive plenty of time to work out all of the bugs and make sure that you didn't have a lull in between story sections of the game. Of course that means going without Hitman for almost a year but it looks like Square Enix will be taking care of those hold outs as well as those who want to own a physical version of the game on the PS4, Xbox One, or PC. Yes, there is a full boxed version coming for the first season.

Coming on January 31st of 2017 will be the Hitman: Complete First Season Steelbook that will house all of the episodes that will be out before then. Also all of the updates, tweaks that have come, and the little extras that have been pumped out there to keep us following along live busy between episodes. Not only that but all of the bonus DLC and content that have been offered up before then too. Also some behind the scenes stuff, a soundtrack, and the bonus six missions for those who opt to pick up Hitman on the PS4; because they paid for it…

Of course this does mean that those who held out for this will miss out on all of the live updates and elusive targets that are going on before January 31st but I'm guessing that since you've missed nine already you'll be okay with all of that. None the less, here is what will be coming in this bundle of Hitman for $59.99 USD. Have you been holding out for Hitman's full first season to release like this? Does this appeal to those gamers out there who have been playing the episodic adventure since day one? Does this kind of indicate that there will be a season two for this version of the IP or are we reading too much into that? Let us know and feel free to discuss in the comments below. For more on Hitman as it comes out be sure to stay right here as we'll keep the updates coming as they flow out to us. You won't want to miss a single thing.