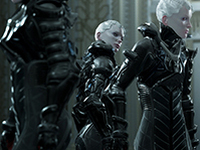 It seems like almost every video game that has AI in it claims to top of the line and for a challenge for players but as it looks the new title ECHO is taking the cake. This would be the new title being crafted by developers Ultra Ultra that looks to learn your actions during play and customize the enemies according to the way you play. In simple terms it looks like ECHO is aiming to be a learning game that will have you fighting yourself in many aspects when it comes out Spring of next year for PC and consoles.

Of course it isn't that basic as the core gameplay of ECHO is tailored around this "learning" feature as the game places you in a Palace that watches your every move when the lights are on. After studying you it crafts "Echoes" of you that use the same moves and tactics that were witness before. So if you go around taking everything down in stealth then the Echoes in the next wave will be stealthier. Now expand that out to every little thing you can do in the game and you'll understand ECHO a little better. Like I said, it's "like" a learning game.

Of course if ECHO's enemies just kept learning from your moves the game would quickly be pointless. Of course Ultra Ultra knew that too and that is why there are "blackouts" in the palace where the ever-watching system is blind and only gives the new Echoes the tactics and moves that were witnessed between two blackouts. So they get reset each time so we can better plan our moves and tactics to make sure we get to whatever the end objective is in the game. I'm guessing there will be some story of sorts in ECHO but that will most likely be shown at some later date.

The Palace creates "Echoes", exact copies of you in every way, that behaves like you and only do the things you do. So the way you play the game shapes your enemy. If you run, soon the Echoes will get faster. If you sneak, they will get stealthier. If you shoot, they will start to shoot back. The game constantly reacts to your every choice and input.

The Palace "reboots" every few minutes, resulting in a blackout. This blackout-cycle is the rhythm at which the "Echoes" get updated with your latest behavior, learning and unlearning from your actions. During the blackout the palace is blind, giving you the freedom to act without consequence. This is the time to run and gun and do all the things you don’t want the Echoes to learn.

The experience is one of being up against your own choices from the last blackout-cycle, giving you a way of shaping the game from cycle to cycle. It is up to you whether you prefer to keep a low profile or if you choose to go and deal with the consequences later. -One thing is certain: You need to keep a cool head as you face the ultimate enemy: Yourself.

Are you impressed or intrigued by ECHO or do you think it will fall into the missing area of the gaming world? Does it sound like the game will be challenging when all is said and done? How would you keep changing up your tactics in the game to make sure you don't play yourself into a corner? Let us know and feel free to discuss in the comments below. For more on ECHO as it comes be sure to right here as we'll keep an eye out for more on the game and you'll want to stay up to date.