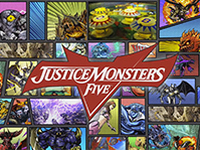 Maybe you remember or maybe you don't but way back when Square Enix was showing off Final Fantasy XV there was a small tease about a mini-game mixed in called Justice Monsters V. It was a pinball looking title in the game proper that we were told would be getting a mobile version for us all to enjoy outside of FFXV. But the date was left a little vague and then there was no update on Justice Monsters V when the big delay happened for the main title. Well, it looks like you can pick it up right now on the iOS and android devices. Hopefully you have one or you'll have to wait until the end of November to play.

As it looks, Justice Monsters V isn't your usual pinball kind of game and more or less a bouncing title where we take on the role of one of the game's monsters to save the world. It's very basic but it is something to hold us all over as we wait for Final Fantasy XV to finally launch. Although it doesn't look like there is any cross over bonus between the two as of right now. Although I'll admit my experience with the game so far is rather limited and not much else has been described for Justice Monsters V before now.

Players join the Justice Monsters – Bomb Bro, Casanova Coeurl, Fab Flan and Lamiana – in the struggle to save the Nova Galaxy from the diabolical Lord Vexxos. Using simple touch and flick controls, engage in exhilarating battles, unleash special attacks, and recruit and train new monsters to fight for justice and defeat the forces of evil.

As I said, currently you can download Justice Monsters V on your Android and iOS device and give it all a play. It looks like there is some form of story in there but for the most part something to tide us over until the bigger launch. Either that or get us prepped for the full version that will most likely give us some in-game bonuses as we play. So I guess there is that reason to get playing Justice Monsters V before then. It makes sense given the universe Square Enix is setting up here.

Will you be downloading Justice Monsters V on your mobile device or will you be waiting until FFXV finally launches? Does it look like it will have some kind of cross over at some point or do you think it will be set for just a fun time waster? Do you think the in-game version will be more or less fleshed out than what we have here? Let us know and discuss in the comments below. For more on Justice Monsters V or Final Fantasy XV be sure to stay right here on the site as we'll keep the updates and news flowing for them as it all comes.