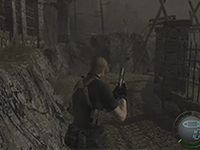 Today is the day and Resident Evil 4 Remastered has been released. This is one of my favorite so far in the franchise and I am so glad to see that Capcom has brought it to the PS4 and Xbox One so I and all of you can relive the horror from so long ago. I mean it's not like Resident Evil 4 hasn't been ported and remastered a few time already for so many other platforms out there but here we go again and for the current gen systems. That has to say something for this game and its stay power over the years. Eleven years is some true stay power right?

Well, we've covered it a few times here and told you why you should give Resident Evil 4 a try or why you should pick it up if you loved it before. If you are still on the fence for some reason, here we have even more gameplay from the most recent build running at 1080p and 60fps. While it may not look like a game made this year exactly, it does look like it was brought over fairly well that it could almost pass for something recent. If nothing else, the enemy AI, story, game mechanics, and horror in general is reason enough to warrant another go.

Of course the Resident Evil 4 Remastered does come with the core game but it also comes with all of the other great additions that came with all of the other ports out there. Here's exactly what you get with it all if the above video and all of the past looks have made you take the plunge to give the game another play. I'm sure that Capcom will be happy with that as well.

This current release of Resident Evil 4 on PS4 and Xbox One includes all the bonus content from the original game, as well as additional features that were added in later versions:

Are you still reading this and then going off to play Resident Evil 4 Remastered shortly after? Were the improvements done here enough to give you a reason to pick the game up yet again? Do you think that this game might also get the full remake treatment as Resident Evil 2 currently is? Let us know and feel free to discuss in the comments below. For more on Resident Evil 4 or the franchise in general, be sure to stay right here as we'll keep it all coming as it comes out. No matter how big or small it could be.