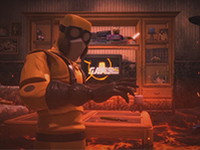 A new title from Klei, Hot Lava, has been announced and it aims to bring us the most epic game of Hot Lava from our childhood… hopefully

If you thought you had some of the most epic games of Hot Lava when you were a kid then you might have to re-think a few things. As it turns out, it looks like Klei Entertainment (Don's Starve, Shank) is out to top them all with their version of the classic childhood game. They have just announced their new title is Hot Lava and it looks to place us all in the living room where the lava in the title isn't just in our imaginations but it is also something that can truly harm us. Or harm our avatars in the virtual world but you hopefully get the gist of it all by now.

The first trailer for Hot Lava can be seen below along with the announcement description but as it looks we won't be limited to the virtual homes that we would be in the real world. Also all of those sweet moves from our dreams can be played out here as we'll have some great parkour, swinging, and wall-running mixed into the action to get from point A to point B. The level of detail on all of that hasn't been completely defined out yet but the following trailer does explain it all pretty well.

Hot Lava transports you back to your childhood imagination. Relive those moments of excitement, joy and chaos. Traverse distinct worlds, from school hallways to the memories of your darkest fears. You will have to use all your skills to complete the treacherous obstacles that await.

There is no specific looking reason to be running through the worlds in Hot Lava but I'm sure Klei Entertainment has that well under works. I know I never had a reason to get around the room other than the fact that I could. Maybe it will all be linked into the retro looking characters that we'll be playing with but just like the release date and all the platforms are still up in the air. At least there will be a beta test available for Hot Lava at some pint as well that you can sign up for as you are reading this text. Go do it now.

What do you think about Hot Lava and what has been shown so far? Do you think it will be a hit like their other titles or will it be a quick little thing to fall off just as fast as it came out? Do you think that we'll have real reasons to get from point A to point B or will it just be to see if we can do it? Let us know and feel free to discuss in the comments below. For more on Hot Lava as it comes out be sure to stay right here as we'll keep on top of it all as we can.