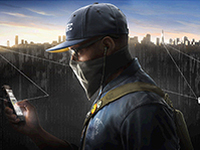 We've all seen some fun footage for Watch Dogs 2 so far and there has been quite a bit of explanation with it all. From the stealth action to the hacking to the multiplayer Ubisoft has been cramming it down our throats and it has all been just as amazing as the first time we saw the franchise in action. Now that Watch Dogs 2 is just over two months out from launch it looks like it is high time that everyone gets to see what has been going on behind closed doors for press and media types at all of the conventions; with new-ish gameplay for all.

For the most part what we have here is the fun twenty-minute demo for Watch Dogs 2 that was shown off at E3. Some of the mission details and actions are a bit different than I remember but it does give us all a solid look at how the co-op and multiplayer will work in the final game. Something that wasn't completely present before when watching it on the show floor. Hence why I saw this is all new-ish and not completely new. It may be new for a good portion of the base followers of the franchise here but I'm sure the die-hard fans have seen just what the rest of us are about to see.

Sit back, relax, and get ready to dive into the gameplay footage narrated by the Animation Director for the game. I'm sure you'll see a lot more of the new than the old here for Watch Dogs 2 but none the less it is worth the time.

During E3, we got our first crack at playing Watch Dogs 2 with a demo that let us take on missions in San Francisco and Oakland as protagonist Marcus Holloway. Now’s your chance to see it for yourself, as this video walkthrough narrated by Animation Director Colin Graham features a complete look at the demo, from the early drone’s-eye view of San Francisco’s skyline, to the sneak-and-hack sample mission, to partnering up with another player and ambushing gang members as they meet up in Oakland.

Are you even more amped for Watch Dogs 2 now that you've seen more alpha gameplay? Do you think that the co-op will always run as smooth as we have to see here or will the human factor screw things up? Do you think that we can really go at each mission however we want or will there always be only a few select paths to go? Let us know and feel free to discuss in the comments below. For more on Watch Dogs 2 be sure to stay right here as we'll have more as we get closer to the November 15th release date on the PS4, Xbox One, and PC.