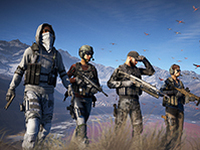 It should come as no real surprise here but hopefully it is well known that Ghost Recon Wildlands is aiming high for a level of immersion. It is something that we see in almost all of Ubisoft's titles and they bank on it for the sales and the extra DLC that can be put out there for a deeper immersion into their games. Like I said, Ghost Recon Wildlands is not going to be different at all and now we get to see just how customizable our Ghosts are going to be when we pick up the game on March 7th 2017 on the PS4, Xbox One, and PC. Most likely well after that launch too.

As it comes to Ghost Recon Wildlands we get to start out with just the level of detail we'll get to make our character feel like we want to in the game. All through twelve different options where it comes to our urban wear we'll need to blend into the crowds as well as just survive the world we are set in. Hopefully the basics of gender and ethnicity aren't lumped into those options but it does look and sound like we'll get to tailor everything from top to bottom on our characters. Have a look at some of the various options we're going to have out of the box.

From the gender of your Ghost to the clothing they wear, you can customize more than 12 different elements of your character’s appearance, including their hat, headset, glasses, hairstyle, fabric colors and patterns, and more. This flexibility results in an exponential amount of custom combinations, and gives you the freedom to create a Ghost that reflects the way you play.

Of course it takes a lot more than just basic appearance to give us an immersion factor in the game. It is nice but if it doesn't get messed up or fit the game's world then it takes us right out of it all. That is where the new engine for Ghost Recon Wildlands comes in as it will take it upon itself to alter the clothes based on the environmental issues it faces as well as the general mixing of things. You wouldn't have your hoodie up when you have opted for a different piece of head gear right? Well that is apparently taken into account and fixed on the fly for us. It makes sense but also seems to limit us again. All in the name of authenticity.

What do you think about the customization options we'll have in Ghost Recon Wildlands? Do you think that the engine will do its job perfectly or will we be left with some frustrations with it "fixing" things? Are you glad to see that even the most minor of elbow rubs in the mud will affect our clothes and gear? Let us know and feel free to discuss in the comments below. For more on Ghost Recon Wildlands in all of its forms as we head to launch, be sure to stay right here as we will have it all.