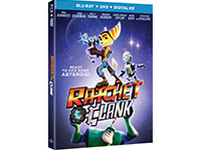 Ratchet & Clank has recently hit the small screens of home with new content. We had a chance to sit down and break the film down piece by piece. Here is our review of Ratchet & Clank

Maybe you remember back when Ratchet & Clank first came out and that there was a feature film that was slated to launch with it. It did launch in theaters shortly after the video game's launch and Insomniac Games had its IP all over the place for a short time. As films always do, Ratchet & Clank left the big screen and we were left with only the video game to keep us coming. That is until August 23rd as the feature film is now available on Blu-Ray and DvD and we also had a chance to check it out for you. Here's our review of the film based on a video game that was based on the film…it makes sense…

Just as the video game franchise has done for a while now, the Ratchet & Clank film follows the unlikely team up of our favorite Lombax and his defective little buddy. They know of a galaxy ending plot coming up and need to get the information over to the Galactic Rangers so they can help save the day. This also happens to be the dream job of our titular hero Ratchet and due to his work he lands it. Rifts are caused in the team due to this and now they all need to work past their personal issues and work together to save the galaxy from the insanity of Chairman Drek and the villainous Blarg.

Given the many different ways that the Ratchet & Clank film could have tied into the video game outside of story, especially when it comes to the home version, but there seemed to be a lack of any real extras or bonuses to link back in. In fact, as it seems the only real extras are a couple of behind the scenes video that don't really feel to add anything of substance to the whole experience. Did they just not have anything else to give us or was it already out there and they didn't see the reason to pack it in? I'm not sure which it is but the lack of extras did hold the disc down a bit for me.

For a film based on a video game that had yet to be released I do have to say that the teams involved did an amazing job of bridging the two between mediums. Mainly in story and action. I did play Ratchet & Clank way before I saw the film and as the game was supposed to be based off this film it made sense that we'd see a few of the same sequences told in a different way. The film here added a lot of other subtext and scenes that the game kind of glossed over or may have been missed as you were the one performing all of the action and not just along for the ride. That is the bonus of video games and the film here captured some of that expertly.

Another great thing that was present on the Blu-Ray here that wasn't achievable on the big screen was the addition of all the little extras in the background or Easter Eggs. These usually fly right by when on the larger screen and I was shocked to see how many fun little references and jokes I missed in Ratchet & Clank due to the big screen setting. Subtly little things like text and character images that popped up and glossed over could be spotted here. Almost like it was set for a small screen but forced to be on the big. None the less that was something I loved when re-watching the film again at my own pace.

In the end, Ratchet & Clank was a fun film that tied into the video game perfectly and added a lot of little extras into the mix. A lot of little extras that could be easily missed in the big theater setting. Sadly, there wasn't a lot of extra content on the disc itself to add to the overall experience. That doesn't mean that you should skip it completely if you are a fan of the franchise and video game. The physical version of the film is most likely not for you but the digital version should be picked up to add to the bonus of it all. Maybe next time they will add in some new extras to get us all excited for the physical version but only time will tell.

Ratchet & Clank was produced by Universal Pictures Home Entertainment on August 23rd, 2016. A copy of the film was provided by the producer for reviewing purposes.