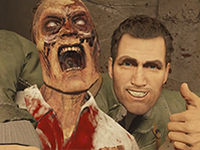 There has been a whole load of gameplay released out there for Dead Rising 4 and it looks like we have even more to show off right out of Gamescom. It may not be in the form of a solid demo of the game run by Capcom but it is a whole lot more gameplay and showcasing of some of the games more unique weapons and armor. I mean Dead Rising 4 wouldn't be a fit into the franchise if it wasn't for all of the over the top style of weapons, armor, and gadgets so this is to be expected. Only here we get to see how some of them all link together to make some badass attacks and items.

More or less this is just b-roll for Dead Rising 4 than anything but it is pulled right from the game and looks to be a single path that the player has taken. It does show off some power armor and those crazy weapons I spoke of but it also looks like there is a Blanka costume from Street Fighter that also give us the ability to use some of the character's special attacks and moves in Dead Rising 4 we have to keep it all in the Capcom family here and it looks like there won't be a change here at all. Although I'm not sure how well that dive roll will keep working out as the game goes on…

Have a look for yourself and see what new gameplay we have here for Dead Rising 4. Maybe you'll see even more references in the clips or at least how those new zombies will be attacking Frank and making his life even more of a living hell.

Did you enjoy all of the new weapons and armor we had here for Dead Rising 4? What are your thoughts on the Blanka suit and do you think we'll see other bigger references in the final game? Do you think that Capcom might be going a little too over the top with things or is it just right again? Let us know your thoughts on it all and feel free to discuss in the comments below. For more on Dead Rising 4 as we head toward the December 6th release, be sure to stay right here as we'll keep all of the news and updates flowing for you right here.