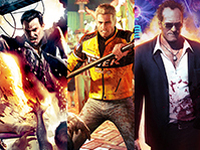 Yesterday, August 8th, marked the literal 10th anniversary of Dead Rising's first release date and now it looks like we have a solid date on when we are all going to get to play the remaster of most of the titles that have come out in the franchise to date. I am not certain why Capcom is leaving out the third solid game in the list here but they are. None the less we will be getting all of the other Dead Rising titles remastered and out on the PS4, Xbox One, and PC on September 13th with all of the usual upgrades and additions we should expect.

Among the list of upgrades for these Dead Rising titles we can see all of the games getting the pumped up resolutions to 1080p and the frames locked in to 60 fps. Not too shabby for all of those players who missed out on all of the titles the first time around do to chosen platforms or just time and money. Now you can get all three of those said titles for less than the price of one. Now you'll just need to find the time to play them all so they all just don't get downloaded digitally and then lost to the world of the backlog. You know we all have one and it is ever-growing.

Each of the titles can be purchased separately if you don't want to repurchase any of the Dead Rising games just yet. Each will cost you $19.99 USD or you can get the full bundle for $54.49. Of course that is all digitally but if you are a physical disc enthusiast you can look to get Dead Rising and Dead Rising 2 physically for the same price but on September 27th. Just a little bit extra to wait but it could be worth it so you can have the solid discs in hands.

Are you hyped to see that all of these Dead Rising titles will be coming here shortly now? Does it look like Capcom has updated the games enough to make it worth it all for us? Will you be picking them all up in one bundle or will you be getting each individually as they come out? Let us know what you are thinking about all of this and feel free to discuss in the comments below. For more on Dead Rising in all of its forms be sure to keep your eyes locked into the site here. If not for the remasters but for the next major title in the franchise.