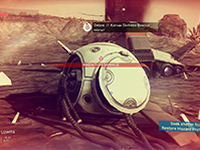 It looks like I was wrong when it came to the recent intro videos for No Man's Sky that we were getting here. Originally the first one was released by Hello Games with enough time to release one each week up until its August 9th release. I guess it's good for all of us wanting more for No Man's Sky as it looks like the rest of the videos are out there and we get to see just what we are going to get in terms of the core gameplay of the game. At least the four main aspects that they wanted to focus on here in the game.

The first one we have here is for the Fight aspect of No Man's Sky. Just as was to be assumed it looks like we are going to be having some fun space battles as well as the ability to kill creatures on the planets we come across. It looks like this core violent gaming aspect has made its way into a game that looked to be more like an exploring game. I guess this kind of says something about our culture as we need to have the ability to kill to have true fun in a game. I just hope this isn't something that will keep being forced in No Man's Sky and only come up when needed.

Now we get to see just how trading works in No Man's Sky. It looks like it is pretty much as we all could expect. We find rare and useful things on other planets and then sell them to vendors in some sort of hub. I am guessing that this is also something we can do when we run into another player in the universe but given the size claimed that should be something rare. At least outside of hubs that are already set up in the game. At least that would be my guess here.

Lastly, we have the Survive aspect of No Man's Sky to have a look at and it is different enough from the Fight one to count I guess. While one thing is to survive the violent creatures on the random planets we find it looks like some of the randomness of these planets will also include environmental kinds of things too. I wonder if these will be randomly based or if there will be some solid reason for the climates. Like if a planet is too close to a star or too far away will that be what dictates the temperature and radiation levels? I'd hope so but I guess we'll have to wait and see.

Are you completely ready for No Man's Sky to launch now? Did all of these aspects play out pretty much how you thought they would or were they different in your brain? Do you think that the procedural generation will take in the real world factors into account or will it be truly random out there? Let us know and feel free to comment down in the comments. For more on No Man's Sky as we head toward the launch date be sure to stick around right here for everything that we can get our hands on.